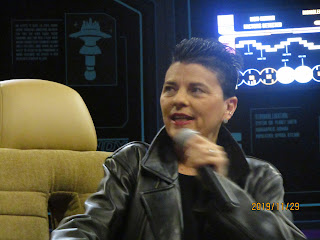 You may not recognize the name, but Tracee Lee Cocco has appeared numerous times on Star Trek: The Next Generation, Star Trek: Deep Space Nine, and Star Trek: Voyager. She was a background character, usually a Starfleet officer, and sometimes an alien. In person, Tracee is the nicest, funniest, most loveable person you could ever meet. She was also seen several times on Ten Forward as Picard's girlfriend. Hey, that means they should have her on the new Picard series. Well, we actually have a petition for that! Nayr and I started a petition here
https://www.change.org/p/return-leiutenant-jae-tracee-lee-cocco-to-the-star-trek-universe?cs_tk=AoA1Mk4wERakO4WB6V0AAXicyyvNyQEABF8BvLodkJbb5GtZ1xYUjqOrQPY%3D&utm_campaign=e2214eb89f8d45d18c3ed1b0ad39e490&utm_medium=email&utm_source=recruit_sign_digest&utm_term=cs
to get Tracee back on Star Trek. Tracee has expressed to us that she is thrilled about the idea, and thanked us for starting it! We already have over two hundred signatures.


The Janeway Project is a movement to have a monument of Captain Janeway displayed in Bloomington, IN, the future birthplace of Captain Janeway from Star Trek: Voyager. The founders of the project, along with some of their friends on the project's committee, did a wonderful panel at the con. They had already started a public fundraiser on Patronicity. They were very close to their goal at the time of the con. At this time, a few weeks after the con, they have reached their goal! This project was also supported by Dr. Erin Macdonald, astrophysicist and guest at the con, who spoke during the panel. She said that Janeway was a huge inspiration for her to become a scientist, which she even mentioned in her Ph.D. dissertation. The unveiling has now been set for May 23, 2020.

Sighting: Moxie Anne Magnus
Oh, and who could forget Moxie Anne Magnus? She’s a comedian drag queen who appears at many cons in the Southeast. She did her own variety hour, had a guest table at the Dinner with the Stars, and was a host for the Opening Ceremonies. She’s always hilarious! You can also find her walking around the con. You can't miss her, with her Janice Rand hairdo and her high heel boots. She’s great fun to talk to.

Around the Con:
Even with all of our excitement, we still found time to walk around the con. There was a large room with fan tables and celebrity autograph tables. There were also fan tables for Starfleet Command and the Janeway Project. There was a silent charity auction that had some cool stuff. We got a "Balance of Terror" t-shirt at the auction that we just love. There was a lady vendor in the vendor's room that always has stuff we like. We bought several books from her. The most popular thing I saw in the vendor's room was a crocheted Star Trek shawl. I saw several people wearing them around the con. One guest that was missing was Chris Doohan. His mother died right before the con, so he had to cancel. We all signed a card for him and bestowed our condolences. The con promoters announced that he will be a guest at next year’s Starbase Indy, so we look forward to seeing him then.
Mission Log: Starfleet Command
One of the highlights of Starbase Indy is always the presence of Starfleet Command, an international Star Trek fan club based in Indiana. Nayr and I have been members of SFC for several years now. The club had their annual meet-and-greet dinner Friday night. We had awesome food and Trek'd out with all our friends. Right at the end, when we were posing for a group picture, con guest Tracee Lee Cocco happened to be walking by and got in the picture with us!
The next morning was the annual SFC awards ceremony. Nayr got the Noncommissioned Officer of the Year Award. Then he got a promotion to Ensign, just minutes afterward. Then came the big announcement I had been waiting for. A new ship was commissioned: the USS Athena, with myself as the Commanding Officer and Nayr as the Executive Officer. We had been working on getting a new ship for several weeks before the con, so this was the long-awaited culmination of our hard work. We had already been trying to get new members, so at the time of commissioning, our ship already had eleven members. The next day, because the rules didn't allow it to be done on the same day, I was promoted to Lieutenant. So, yeah, it was a huuuuge weekend for us! It will be great having our own Starfleet Command ship--our own fan group in our area! 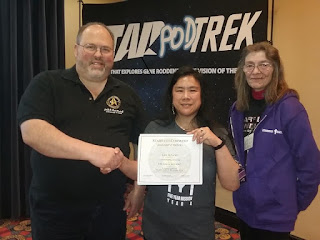 *Note: For more about our fun experience at Starbase Indy 2019, click on this link https://www.kag.org/11-29-19-12-1-19-invasion-of-starbase-indy-2019/?fbclid=IwAR1FscDRbd9RjblMjQaJSBUdxXEKdX1U45gG9Hlb2BTXpRY4nQRiVvMP6CE 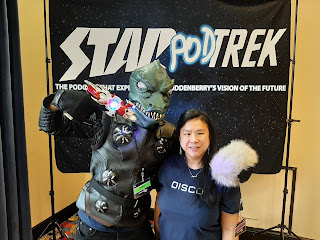 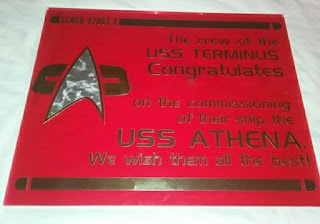 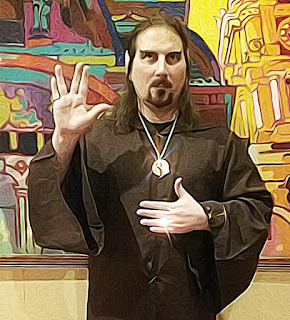