Not Too Long Ago, In a GalaxyCon Not Too Far Away

"GalaxyCon" is a string of sci-fi/fantasy/comic cons that take place in several states. My husband, Nayr, and I attended the one in Louisville, KY this year. We also went to the one last year, only then it was called "Louisville Supercon". We heard they sold the name "Supercon" to another conventioneer. It was a really cool name, but then "GalaxyCon" is a much better descriptive name for a con that attracts fans who are into space and the fantastical.
One of the guests, Lou Ferrigno, is a staple at many cons. Many of us know him as the star of The Incredible Hulk. His panel was described in the program book as being about fitness, even though fans could ask questions about anything. I love hearing him talk. I was a gym rat many years ago, and I am still into fitness. He did a little intro, saying that he grew up poor. He couldn't afford to buy weights when he was a teen, so he lifted stacks of comic books. Someone asked him how to keep from gaining weight over the holidays. (This con took place in November.) He said you can eat holiday food, if that's what you want. Just don't do it every day, and try adding twenty minutes of cardio the next day. He said staying in shape takes consistency and a connection of mind and muscle. His best line was "your health is your wealth", which I think is very true. 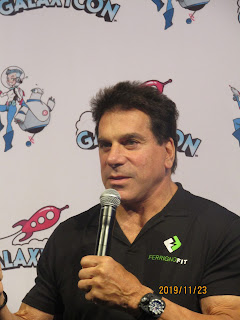 
One of the guests I was most excited to see was Christopher Eccleston, the ninth star of Doctor Who. He doesn't do a lot of cons, and this was my first time seeing him. He said it was great working with Billie Piper, who played his Companion on the show. She was known as a pop singer before she did Who. He said she was as much a reason for the show's success as he was. He was also a fan of the British star Sean Connery as James Bond. If you watch how Chris fell down when on the the Tardis, he was very much trying to imitate the way Connery took his great falls in the Bond movies. Chris admitted that he had a tough time on Doctor Who behind the scenes. The producers were trying to make a true comeback for Whovians, but Chris was treated badly by the show's producers and the British press. On a positive note, he said the writers noticed he used the word "fantastic" in his everyday speak, so they wrote it into the show. He worked with the current Doctor, Jodie Whittaker, on the play Antigone back in 2012. He said his favorite part of playing the Doctor is doing cons. He said he would redo a lot of the first season if he could. He would take out some of the zaniness. That garnered a lot of disappointed sighs of "aw!" from the audience, so he immediately said, "I would not take out ANY of the zaniness!" Chris was an absolute joy to see. He was very appreciative of his fans. 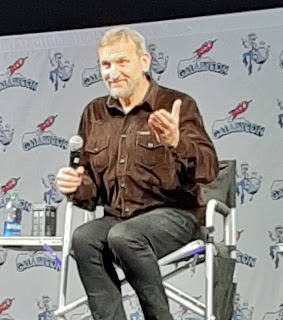 Brent Spiner is another who is always a thrill to see. If you follow my blogs and my Facebook page, you know that I've seen Brent lots of times. I love his sense of humor, and of course, his Patrick Stewart impersonations! He again mentioned, as he did at Cincinnati Comic Expo where I saw him two months before, that he signed a Nondisclosure Agreement, or NDA, for the Picard series. He did have some reservations about doing Picard, because he knows he is a little too old to still be playing Data. He always gets asked about how hard it was to play Data. He said it was actually pretty easy to get into character. It was also pretty easy for him to not use contractions as Data. It was also not hard for him, believe it or not, to go a long time without blinking. The learning curve for Data's character development was more an issue for the writers than it was for him as an actor. He praised Jonathan Frakes, saying that Jonathan was not only a good director, but an underrated actor. Brent said that going from Star Trek: The Next Generation television series to the movies was great, because they had a much bigger budget. As he put it, "Our moms didn't have to make our costumes any more!" 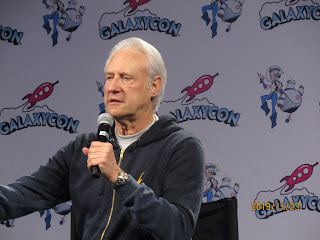 J. Michael Straczynski, creator of Babylon 5, was the guest I really wanted to see at this con. His con appearances are very rare. This was my first time seeing him. Babylon 5 was always one of my favorite shows. Nayr was the first to ask Straczynski a question at his panel. It was basically a question about the similarities between Babylon 5 and Deep Space 9. Straczynski looked very distraught and made it obvious that he didn't welcome that question. He said he pitched B5 for 5 years before it and DS9 ever got made, and that DS9's showrunners almost killed his show twice. He didn't go into details about that. Someone asked him about the chemistry between Londo and G'Kar on B5. He said that was a surprise. It turned out that Peter Jurasik and Andreas Katsulas, the actors who played Londo and G'Kar, respectively, were such good actors that they could do anything the writers wrote for them, and their chemistry just developed naturally. He definitely had an "out" in mind for all the characters, in case anyone had to leave, such as Michael O'Hare leaving after the first season. He was good friends with the late Harlan Ellison. He said Harlan wasn't really such a bad guy, as his reputation suggested. Straczynski said that he himself is not good with people, and that he wants to be alone more and more as he gets older. He sees himself as a writer first and foremost. He feels most alive when he is writing. He spends 12-14 hours a day writing. 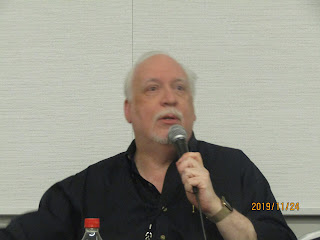 Not only did we attend panels, but Nayr and I also hosted two of our own panels at this con. We did "Star Trek 101" for people who are looking for a starting point to jump into Trek.  There were some teens in the audience who were just getting into Trek, which was the perfect audience for our subject matter. Our other panel was "Exotic Aliens of The Original Series", another Star Trek panel that has always been a big hit for us at cons. The Louisville chapter of the Star Trek fan club Starfleet Command, the USS Hunter S. Thompson, had a fan table and did their own panel on Star Trek: Deep Space 9 and the late Aron Eisenberg, who played Nog on DS9.
Kirk Thatcher, the punk rocker in Star Trek IV: The Voyage Home, was also a guest I wanted to see that I had never seen live. We spoke to him at his autograph table, and he told us some neat stories. He wrote and sang the song that was playing on his character's boom box in Star Trek IV. He also wrote the Vulcan questions and answers that were playing on Spock's video screen in the movie, i.e., the ones about T'Plana-Hath and Kiri-kin-tha. He said he derived the name "T'Plana-Hath" from Star Wars, the-planet-Hoth. "Kiri-kin-tha" is an anagram of his name, Kirk Thatcher. Cool! Not only that, but it was actually his voice asking those questions in the movie! Furthermore, he wrote all the lines in the background of Starfleet headquarters when the probe was approaching earth. Also, it was his idea to have Scotty talk into the computer mouse. Whoa! Talk about a creative genius who created some of the movie's best and most memorable moments!
We did a few other things to round out our convention experience. We spoke with Star Trek novelists Keith DeCandido and Peter David and got them to autograph more of our books. We had a lively conversation with Howard Chaykin, comic book artist and writer. We had dinner with our Starfleet Command friends. We even attended a Star Trek photoshoot, where we met many more Trekkers. This was a very large con, and it was amazingly well organized. We were more than pleased that they let us put on our Trek panels. It was truly a five-star convention! 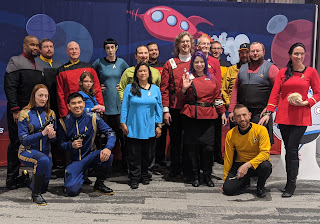 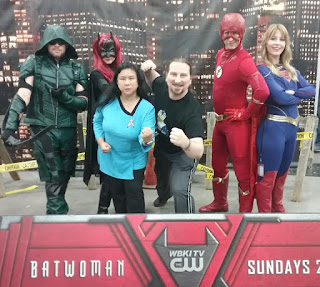 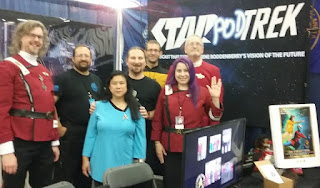 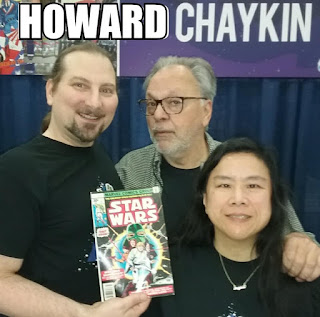