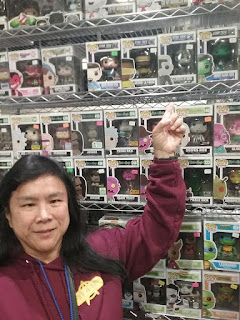 Rhode Island Comic Con is a big media convention with toys and comics and...Well, you know what's always on my mind. Uhm...Are there any Star Trek guests? Why, yes, they did have some Star Trek guests! Even though the one I was most looking forward to, Karl Urban, had to cancel at the last minute. (What can you do? He's a real WORKING actor and doesn't always have time for convention appearances.) The event took place the weekend after Halloween. Needless to say, it was cold. Well, not as cold as I was expecting, but still pretty cold. It was in a big convention center, and the most conveniently placed doors were closed off, so every day we had to walk halfway around the building in the cold to get from the parking lot to the entrance.
The biggest surprise happened before my husband, Nayr, and I even got to the con. When we got to Providence, Rhode Island, we walked around town looking for a comic book store. We were walking down the sidewalk, and Nayr saw this man in sunglasses and immediately recognized him and said, "George?" And the man said, "Yes?" And then I was like, "Whoa! It's George Takei!" He actually stopped and spoke to us for a few minutes. He told us how horrible his plane ride to Providence was. The plane had to fly through a storm, and then the airline lost his luggage. He asked if we were there for the con, and we said, "Yes!" He was very nice and gracious. He even let us take a selfie with him! 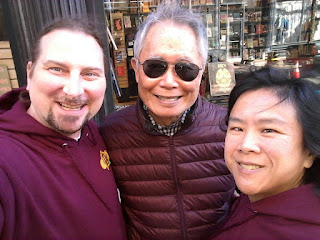 When we got to the con, one of the highlights was seeing Kate Mulgrew, who played Captain Kathryn Janeway on Star Trek: Voyager, who is always a pleasure to see. She's very elegant and appreciative of her fans. She mentioned that she is 64 years old and the oldest of 8 children. Nayr asked her if she knew about the Janeway Project. Unbelievably, she did not. He told her it's a project to put a statue of Captain Janeway in Bloomington, IN, the future birthplace of Captain Janeway. She said she thought it a wonderful idea. Nayr told her it will be next to a children's science center, and she said it was great that Janeway helped inspire so many females to get into science as a career. Even so, she said there were some scenes as Janeway that she would redo if she could, but she had no regrets. It was all part of meeting a challenge. She said she looked forward to being a guest on the Star Trek Cruise next March. 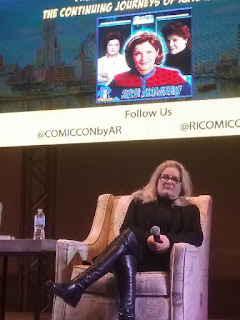 Aside from Star Trek guests, these corporate pop culture cons can have the most surprising guests from your childhood that you could ever imagine. Felipe Rose, the Indian from the Village People, was there signing autographs! Who would have thought you could see anyone from the Village People so many years after the height of their popularity and after the group is no longer together? Nayr and I spoke to Felipe at his autograph table, and he was very cordial. He seemed very energetic for what I would call an "older" guy. I asked him if he was ever a dancer. He said he trained as a dancer for six years before being discovered and being asked him to join the Village People. Most of the other members of the group had to audition. Randy Jones, the cowboy from the Village People, had an autograph table right next to Felipe's. Randy was one of the people who had to audition. He told us he spent some time as a model and actor after the group disbanded.


Walking around the vendors' room, we found the Mego table. This table had their latest dolls, or "action figures", as they call them, for sale. Of course, we had to ask about any upcoming Star Trek action figures. "Doctor Mego", the resident Mego rep, said they were trying to make an action figure of Data from Star Trek: The Next Generation, but Brent Spiner hasn't approved it yet. He said they were also seeking a license for Discovery and the new Picard series, both from CBS. 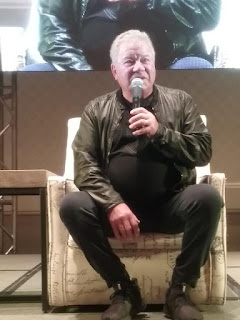 Another Trek guest was none other than Captain Kirk himself. William Shatner was still going strong at 88 years young. At his panel, he said he recorded a country music album at the Grand Ole Opry in Nashville, TN last year. He also said had a new blues album coming out in a few months. I don't think he's really anyone's favorite singer, but his albums must be selling well. He didn't know if ABC will make another season of Better Late Than Never, the television show he did with Henry Winkler, Terry Bradshaw, and George Foreman. It was an expensive show to make.


After Shatner, it was off to see another panel of actors from a beloved cancelled show of mine, Gotham. This esteemed panel had Donal Logue, Sean Pertwee, and David Mazouz. I was so glad to finally see Donal Logue. I was a fan of his on Gotham and Law & Order: SVU. He has been so busy on Gotham that he didn't get to do any cons until after Gotham was cancelled. He said that when the producers were casting the show, he was offered the part of Harvey Bullock outright. He was THAT GOOD an actor. He also recalled that he was in the movie Blade right at the time that Marvel Comics was on the verge of bankruptcy. Blade was the movie that set Marvel on the right path. David Mazouz, who played young Bruce Wayne, talked about growing up while starring on Gotham. It was hard for him to make friends growing up while spending so much time on the show. Even though being on the show took a lot of time, his mother always made sure he put school and his education before his acting job. 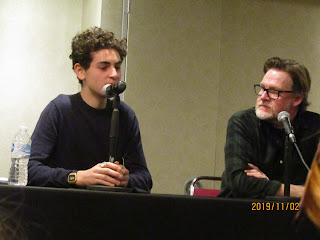 So there are a few other noteworthy things about the con. As usual, the vendors' room was huge, and the cosplayers were awesome. We ran into some friends and had dinner with them. We made some new friends. Nayr's brother and sister-in-law were also there, and we had a nice dinner with them too. The con was sponsored by a furniture company, so the guests got to sit on some pretty nice living room furniture during their Q&A panels. So maybe that's why they were so nice! I'd have to say that my first con in the northern United States was a big hit! 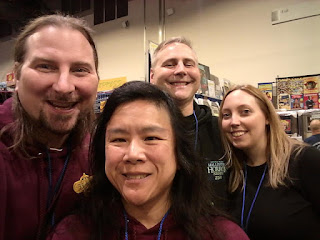 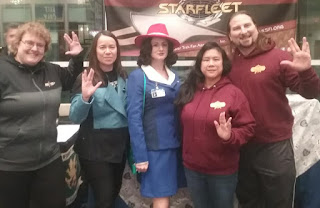 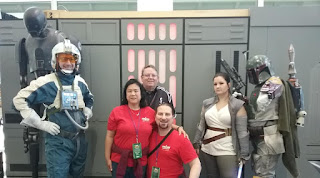