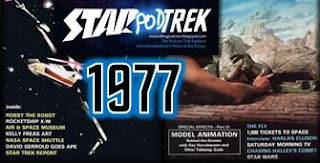 Nayr and Kavura discuss the Star Trek-related articles in the exciting classic Starlog magazine issues 7 and 8 from 1977.

Nichelle Nichols took on a new role of recruiting women and minorities to work for NASA.

Starlog interviews Allan Scott, who, along with Chris Bryant, is writing the new movie script. Surprisingly, neither of them were familiar with Star Trek or science fiction when they took the job.

Nayr and Kavura discuss the original model of the USS Enterprise that is at the Air and Space Museum, along with other amazing historical models the museum houses.

NASA starts its new “Payload Specialist” program which allows “ordinary people” to accompany astronauts on outer space missions. Well, as long as they meet the physical requirements, that is!

Starlog’s printed interview with this angry writer is as entertaining as it is enlightening. Nayr and Kavura also discuss their own stories of Harlan Ellison.

Starlog Had So Much Trek Stuff:

Nayr and Kavura take you through these magazines looking for anything Trek or NASA-related. They find miscellaneous ads for Star Trek merchandise to be delightfully whimsical! Also, letters from Starlog readers, Star Trek conventions, and well-known Trek extraordinaires David Gerrold and Susan Sackett!

Starlog issues 7 and 8 from 1977 kept us up to date on the world of science fiction. We discuss articles on Robby the Robot, Space: 1999, Man From Atlantis, Rocketship movie, Star Wars, Saturday morning TV, The Fly, James Bond, and so much more! What a great magazine for sci-fi fans!

We had a great discussion about the Star Trek articles in Starlog issues 5 and 6, published back in 1977! It was the era when fans started arguing about "Trekkie" or "Trekker". The first Trek movie was highly anticipated. We also discuss the Trek animated series, David Gerrold, and Dorothy Fontana!