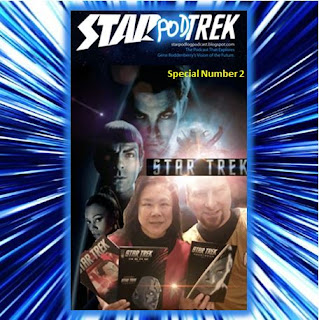 Have you had your share of lens flares? Join us as we discuss everyone's favorite reboot movie Star Trek 2009. The movie was made even better by IDW's stories to fill in the gaps. We take a look at the prequel comic book miniseries Star Trek Countdown and its followup miniseries Star Trek Nero. 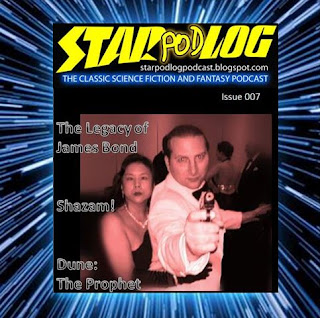 Nayr and Kavura bring you our 007th episode! We discuss the legacy of Bond. James Bond. Spice is life. Our conclusion of Frank Herbert's Dune. DC Comics' superhero Shazam! is a conglomeration of the gods.

StarPodLog Attack of the Clones 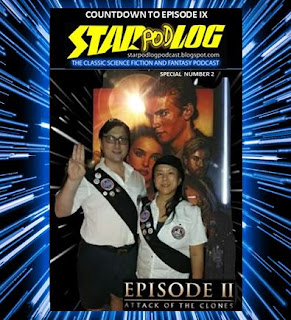 This is StarPodLog Special Number 2. Star Wars Episode II: Attack of the Clones, the stunning second prequel in the Skywalker saga. With action and romance, did it live up to fan expectations? How was the villain? Was Anakin the best hero ever? Our review will not disappoint!

How Star Trek: The Next Generation Changed Television Forever 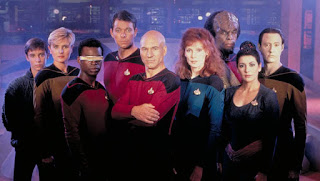 It was very successful in syndication, paving the way for other sci-fi shows in syndication. Hercules, Xena, War of the Worlds, Superboy, and the first few seasons of Babylon 5 all gained success as syndicated shows after TNG. And doing a new version of an older show, which Star Trek did first, also caught on with other sci-fi shows like Battlestar Galactica and Doctor Who. Of course audiences still complain that nothing new ever comes out of Hollywood. But bringing back the classics, when done right, can be a wonderful thing. Later on, when all the Star Trek TV shows and movies were referred to as a "franchise", it was the first time the word "franchise" was used to describe a TV show and its offshoots.
David Gerrold had a monthly column in Starlog magazine reporting on TNG before it came out. He was one of the writers on the show during the first season. David is the one who wrote the scene where Picard first talks to Riker in which Picard mentions Riker's refusal to let his previous captain beam down on an away mission. I remember reading this in Starlog and thinking  this scene shows that the characters would be edgier than before. Well, maybe they didn't quite stay that way, but it was a good start. Riker not wanting Picard to do away missions became one of the staples of the show. It was one of the things David Gerrold had previously discussed in his 1970s book The World of Star Trek, that the captain should not be the one beaming down into dangerous situations all the time. 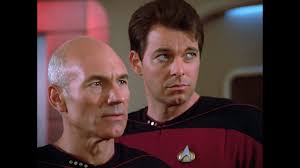 TNG was considered a hit after one season, even though looking back, the first season pales in comparison to the later seasons. From what I read in interviews with Gene Roddenberry, it was a risky move putting the show in syndication instead of trying to sell it to a network. It had to be sold to independent TV stations who would show it on a different day and time in each area. So the only way you could know when it was on was to check you local listings in TV Guide or the Sunday paper. Remember, this was 1987. Pre-internet. Plus, it meant they would have a lower budget. But, as Gene said, the original series flourished in syndication, not while it was on a network, which was a good indicator that this new series would have a good chance. Oh, and when I say- quote- "the original series"-unquote-, of course that refers to the original Star Trek. When the next generation started, I remember hearing people stammer when deciding what to say when referring to the -quote-"old" -unquote- Star Trek. Worse, what to call the "old" actors. I remember seeing Nichelle Nichols at a con, and hearing her say that she did not want to be called an "old" actor. So finally, the media came up with the term "The Original Series" or the abbreviated form "TOS", and that stuck. The term "The Original Series" was invented for Star Trek, so to me it can only refer to Star Trek. When the Battlestar Galactica reboot came on, I heard people call the old Battlestar Galactica the "original series". I was like, NO, even though I love Battlestar Galactica, the phrase "original series" refers to Star Trek and only Star Trek. 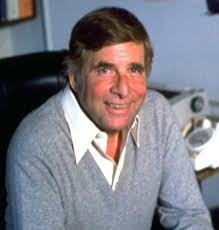 I remember when TNG started in the fall of 1987. I was in college, living in a dorm. In my area, it came on Sunday night at 11:00. Obviously, the local station didn't think much of it. Some TV exec must have said, "we'll buy the show, but let's put it on at an out of the way time when nobody watches TV". But I stayed up and watched it every Sunday night. I preferred to go to bed at that time, but in another way it was convenient, because no one would be asking me to go out to eat or see a movie that late at night on a Sunday. So I could be in my room by myself (I had a private room that year, and I didn't know anyone else who wanted to watch it with me) and happily watch Star Trek. Imagine seeing Q for the first time. A godlike being who didn't like humanity at all. He was a much better character later on when he had a sense of humor. I would have never guessed from the beginning that he would grow to be one of my favorite characters. 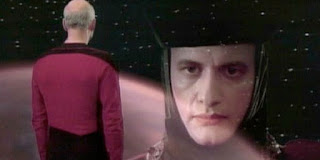 Star Trek, of course, wasn't dead before TNG. The Trek movies had been doing well. Star Trek IV: The Voyage Home was a huge hit in 1986, and TNG premeired the following year in 1987. So for Trek, a new series might have seemed like a natural progression. You know, I wouldn't have minded seeing the original actors come back in a new weekly show. But, you know, they are aging, and TV shows want younger stars. Wait, Patrick Stewart wasn't exactly a spring chicken. That was another, as I've read in interviews with Gene Roddenberry, risky move. Casting a man who's not only more mature, but also bald, didn't fit the bill of your typical leading man. I'm so glad that Gene and producer Rick Berman chose to go with Patrick Stewart. I think they saw that his acting ability and charisma were enough to carry the show. And besides, they had Riker to be the handsome leading man type. But I'm sure even Gene and Rick were surprised by how popular Patrick became. Patrick Stewart actually did become the male sex symbol of the show. What can I say? Captain Picard was a great leader. A man of compassion and yet a man of great inner strength and dignity. He could be a good leader without being stale or militaristic. If you go back and look at Patrick Stewart's work before TNG, such as David Lynch's Dune, you'll see he was always a great actor. It's like he was destined for the role of Picard and the fame it brought him. Michael Dorn at a con once referred to Patrick by saying, "he's god." That pretty much sums it up. He'll even be coming back, starring on his own series on CBS. Remember hearing his voice for the first time doing the opening monologue "Space the final frontier". Ohh that voice! Star Trek: The Next Generation. A continuation of Trek. A representation of the best that Trek can be. It brought many new fans to the franchise, and still does. It will live on forever! 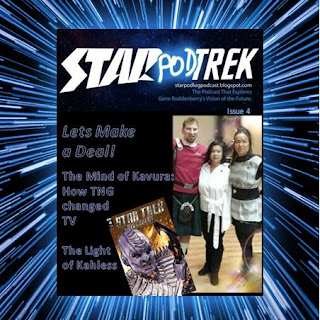 StarPodTrek is back! We're getting our Trek on for another fun episode! "Let's Make a Deal" Star Trek style! From The Mind of Kavura: How TNG Changed TV. And finally, IDW's first Discovery comic "Light of Kahless". Star Trek is our passion! It is our way of life! You can never have too much Trek!