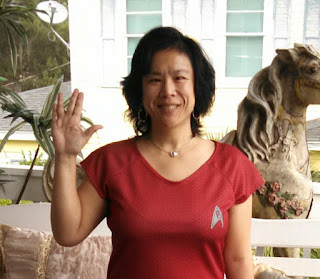 What do you think of when someone says "Star Trek"? Dr. Spock? Trekkies? Geeks? Nerds?

Star Trek started out as a TV show. It grew into a cultural phenomenon all over the world. It has lasted for 53 years in television, movies, books, comic books, toys, games, memorabilia, and conventions. First of all, full disclosure. I met my husband at a Star Trek convention. So you could say I owe my current and future lifetime of happiness to Star Trek.
The original Star Trek series debuted on television in 1966. Yes, it looks dated with its mini-skirts and beehive hairdos. But it is often rated as having some of the best episodes ever on TV. The classic episode "The Trouble with Tribbles" is the best example. Even non-fans have heard of tribbles. My favorite character is the logical, pointy-eared Mr. Spock. (No, not Dr. Spock. Doctor Spock was a human who wrote books on how to raise children.) Spock, aptly portrayed by Leonard Nimoy, was a very complex character. He was half human and half Vulcan. Vulcans, as many of us know, suppress their emotions. So Spock was always dealing with having human feelings and trying to keep in line with his Vulcan upbringing. And then there was Kirk. Now, who can forget William Shatner as Captain Kirk? Kirk was the classic hero, both a fighter and a ladies' man. Also handsome and charming and the best captain of a starship there ever was. The show also sported a racially diverse cast, including Japanese, African, Russian, and Scottish, which was unusual for the time. Star Trek also had TV's first interracial kiss between a white man and a black woman. Furthermore, it pushed the boundaries of storytelling with episodes about diversity, hatred, racism, war, religion, and many other social topics. This sixties show was the show that started it all. Then it spawned six more shows, plus ten movies. There are several new shows currently in production. 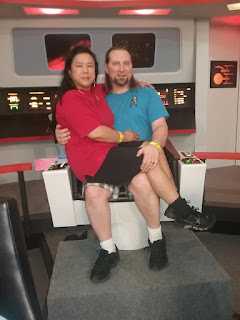 The animated Star Trek series aired from 1973-1974. It had most of the same main characters as the original live action series. It is highly laudable for being a cartoon that was actually written for adults, with the same type of hard-hitting stories the original had. Star Trek: The Next Generation (also called “TNG” or “Next Gen”) came along in 1987. It was notable for being the first sequel to a TV show and for breathing new live into an old show with aging actors. It was a new, updated show for a new generation. Sure, other shows had spinoffs, but nothing with an entirely new cast. I have met people who grew up on TNG and honestly think it is the first, original Star Trek show. It had a very '80s look, which was totally cool for the time. Furthermore, it had the best new adversaries in Q and the Borg. Q was an all-powerful being who was funny, cynical, and always a thorn in the crew’s side. But usually when you saw him, you knew he was going to teach the crew a valuable lesson in humanity, while learning something himself. The Borg was a cyborg race that assimilated other beings into their “hive” by giving them cybernetic implants that completely took over their bodies and minds. The episodes with the Borg also brought up issues of what it meant to be human.
Then came Star Trek: Deep Space 9, Star Trek: Voyager, and Star Trek: Enterprise. While they did not gain the popularity of the original or TNG, they were no less significant. They each added richness to the Trek canon in their own way. Then there were the newer Trek incarnations, beginning with a new reboot movie in 2009. It used an all new cast playing the original characters. It was more glitzy and glamorous, with more adventure and less overall character development. Then there were two more Trek movies with the same starring cast. Star Trek also got a modern look with the new series Star Trek: Discovery. Discovery is a prequel that is set ten years before the original. It had moderate success with season 1, but really hit pay dirt with season 2, bringing back new versions of old favorites like Spock, and getting back to more stories about humanity; stories that made the franchise a cultural phenomenon in the first place. And now there is Star Trek: Picard, the newest series, which is breaking all kinds of streaming records on CBS All Access.

With its 8 television shows and 13 movies, Star Trek has had a cultural impact like no other media creation. Take Klingons for example, Star Trek's arguably most popular race. The Klingons have their own language that is real and spoken throughout the real world. There are even translations of literary creations into the Klingon language, including works of Shakespeare. And the Klingon language is in Bing's language translator. The Vulcans are another popular and instantly recognizable race from Star Trek. The Vulcan salute, which Leonard Nimoy invented from a Jewish hand salute, is a very well-known gesture that everyone associates with Spock and Star Trek. I see strangers do the Vulcan salute when they see me wearing a Star Trek t-shirt. And who could ever forget the song by Information Society "What's On Your Mind", which uses a soundbite of Spock saying "pure energy". The soundbite was so awesomely recognizable as Spock's resonant, baritone voice. I've even heard Captain Kirk mentioned in popular songs, such as "99 Luftballoons" by Nena and a remix of "That Don't Impress Me Much" by Shania Twain. The '80s pop band T'Pau, with their one hit wonder "Heart and Soul", got their band name from a Star Trek episode. 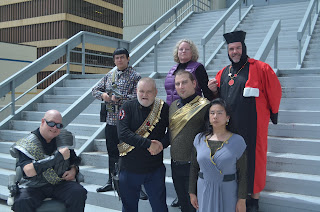 Nichelle Nichols, Uhura, at one time talked about quitting the show when it was still in production in the 1960s. She met Martin Luther King, Jr., whom she didn't know at the time was a fan. She told him she wanted to leave the show. He convinced her to stay because her character was an African woman who was an officer on a starship. That's a groundbreaking role. Nichelle was also a role model for Whoopi Goldberg, who saw Uhura on Star Trek and recognized her as a black woman on TV who wasn't a maid. Uhura obviously made waves and changed a lot of lives.
Star Trek is also popular with politicians. Democratic former President Barack Obama has admitted to being a fan, and had a picture taken with Nichelle Nichols. Former Republican Speaker of the House Newt Gingrich mentioned Star Trek in his lectures at Kennesaw State University as a show about the "spirit of invention and discovery", and he even appeared at a Star Trek convention to talk about the space program. And Stacey Abrams, who ran for governor of Georgia, claims to be a fan who knows even the most minute details of Trekdom. Thus Star Trek even reaches across political parties, gender, and race. It is a show that appeals to, yes, geeks and nerds, but so many others as well.
There are many annual Star Trek conventions worldwide. Fandom is still alive and thriving at cons, with cosplayers and autograph seekers never ending. The most visible con is Star Trek Las Vegas, a sanctioned Star Trek convention that always has over a hundred actors from Trek, from the most famous to the ones who appeared briefly on one episode and never had a line. There is Star Trek Destination, a yearly con in Europe. There is a Star Trek cruise every year that boasts some of the biggest Trek stars, such as William Shatner and George Takei. Trekfest is held in Riverside, Iowa every year. Riverside, IA is a small town that had itself officially declared the future birthplace of Captain Kirk. (It has been stated on Trek that Kirk is from Iowa, but not where in Iowa.) There is currently a petition to get Bloomington, Indiana named as the future birthplace of Captain Janeway, the captain on Star Trek: Voyager. There is a city in Canada called Vulcan, Alberta that publicizes itself as a Star Trek town, after Star Trek's planet Vulcan. They have regular tourists and a Star Trek convention every year. And there are a slew of other local yearly Trek conventions across the US and around the world. 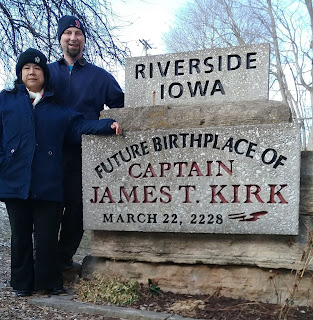 I love spotting Star Trek references on other TV shows. In my younger days, I used to write down every show that happened to make a reference to Star Trek. The list got so large that I eventually gave up. Too bad I don't still have it! There was the time Frasier spoke in perfect Klingon at his son's Bar Mitzvah. There was the time Seinfield talked about a "katra" from the third Trek movie. Even NCIS had a character who spoke Klingon! My parents, who had no interest in Star Trek, always recognized Shatner and Nimoy when they were on any show. Anyone who is on Facebook and sees all the memes is familiar with several pictures of Picard, who is used in several standard memes. Star Trek has made the cover of Time magazine and People magazine, not to mention one of my favorites, MAD magazine! "Trekkie", a fan of Star Trek, is the only word in the Oxford English dictionary that describes a particular type of fan. A model of the starship Enterprise from Star Trek is on display at the Smithsonian. There have been many famous guest stars on Star Trek, mainly because they asked to be on the show. The most prominent was Whoopi Goldberg, who had a recurring role as Guinan on Star Trek: The Next Generation. Other famous people who were on Star Trek: Kirstie Alley, Kelsey Grammer, Christian Slater, The Rock, Stephen Hawking, Seth MacFarlane, and Mick Fleetwood, just to name a few.
Star Trek has proven itself to have staying power. It will live in the hearts of fans forever. With the current and upcoming shows and movies, it will live on to inspire new generations. Trek’s creator Gene Roddenberry, and everyone else who had a hand in it, have made something that is not only unique, but something that embraces humanity and the future in a way that nothing else can, and in a way that nothing else ever has or ever will again. 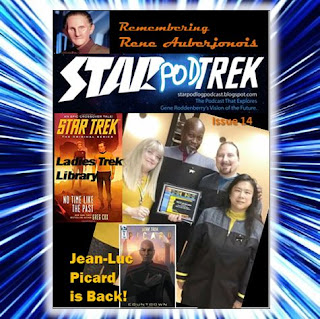 The new series Star Trek: Picard has a prequel comic book series called "Star Trek: Picard: Countdown". We'll tell you if it's worth reading. Ladies Trek Library discusses "No Time Like the Past" by Greg Cox, a novel that puts Seven of Nine in a new adventure with Captain Kirk! The passing of Rene Auberjonois of Deep Space 9 was a shock to the fan community. 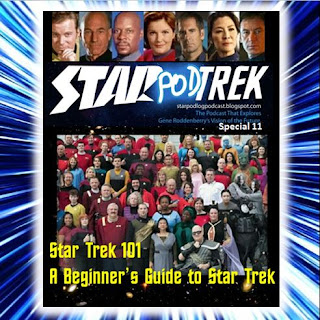 Star Trek has entered our culture and changed our lives forever. Thinking about taking the dive and becoming a Trekkie? Here's our advice on where to begin! Already a fan? Then sit back and enjoy our fascinating discussion of the Star Trek phenomenon! 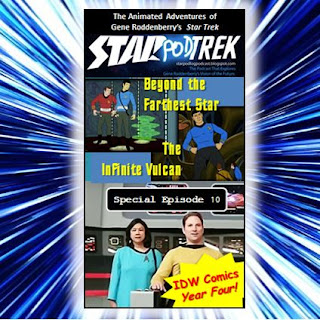 Here it is: our 50th episode! Thank you for taking part in our continuing mission!

The animated Star Trek series was way cool. Listen as we discuss the first animated episode, "Beyond the Farthest Star". Then, "The Infinite Vulcan" give us a humongous Spock! The Star Trek Year 4 comic book series picks up right where the original television series left off and takes us into the boldest new stories ever! Cartoons and comics are the things that would whet our appetites and keep us coming back for more!