Huntsville Comic & Pop Culture Expo is an expo in Huntsville, Alabama that has comics and pop culture stuff. LOL! The name is a mouthful, but at least it’s appropriate. Now in its seventh year, this convention, or “con” as we like to call it, has pop culture celebrities, gaming, and vendors. It is very family-friendly. Huntsville is a beautiful city that also has the US Space & Rocket Center, if you needed even more reason to visit.

Lea Thompson, of Back to the Future fame, was there signing autographs, doing photo-ops, and doing a Q&A panel. Her photo-ops were in front of a DeLorean that looked just like the one from the Back to the Future movies! She recently directed two episodes of Star Trek: Picard and did a cameo in one episode. We were so happy to see her at her first con as part of the Star Trek family! We spoke to her at her autograph table and during her panel, and she said it was a wonderful experience working on Star Trek. She admitted to being a longtime Trek fan! 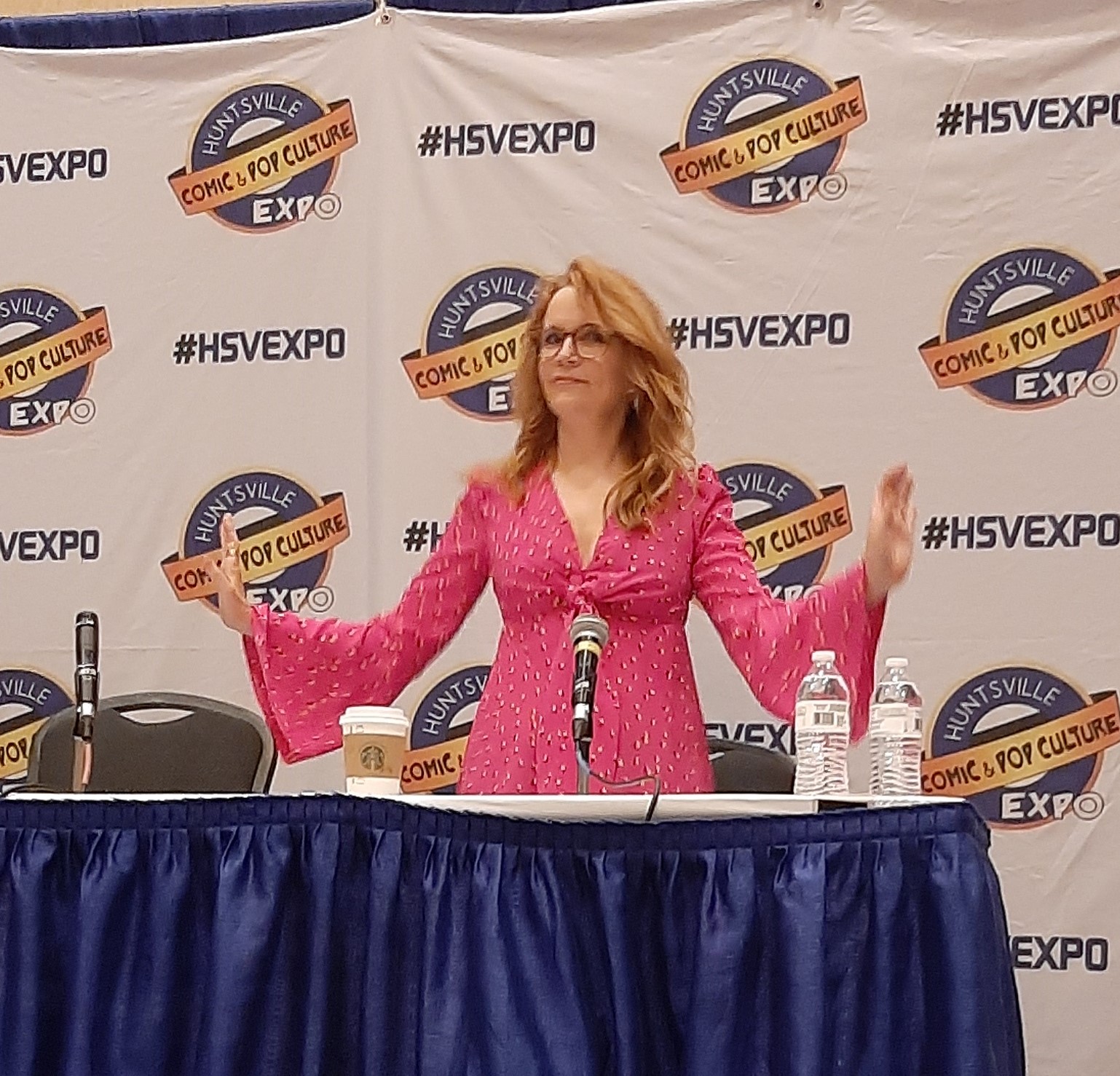 Other guests were Lou Ferrigno from The Incredible Hulk, Tom Arnold from Roseanne, Erik Estrada from CHiPs, and wrestlers Ricky Steamboat and Dustin Rhodes. Nayr and I went to Lou Ferrigno’s panel and spoke to him at his autograph table. He’s a super nice guy. Kevin Eastman, of Teenage Mutant Ninja Turtles fame, had an autograph line that went all the way to Memphis. And that was just a few on the con’s long list of guests. 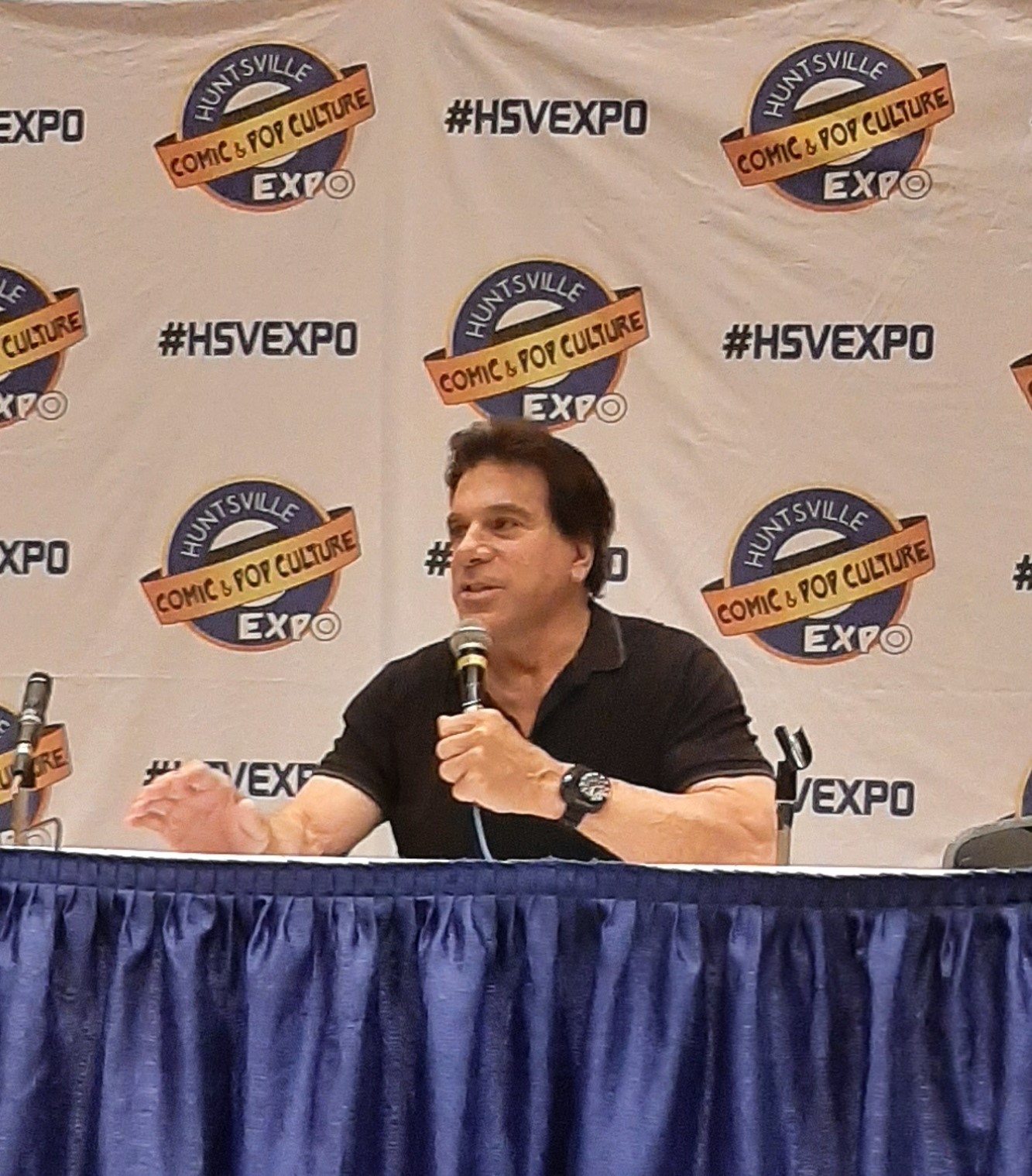 The con also had a video game room with vintage video games. There were several rooms for tabletop gaming. The vendors’ room was huge with lots of stuff from comic books to anime toys to fan artwork and crafts. The room was pretty crowded. It was great seeing so many people out enjoying their fandoms and geekery! There were also plenty of cosplayers: Captain America, Transformers, and Princess Leia, to name a few. We saw some miscellaneous tables, such as one for the local rocket center. Their table had a neat photograph area where you could take pictures of yourself in astronaut getup. Another area of the con had a Bill and Ted phone booth photograph area. These things add so much to the con experience. The 501st and Rebel Legion were also on hand with a photo area and fun cosplayers. Kudos to all the staff and volunteers who made it a totally awesome con! 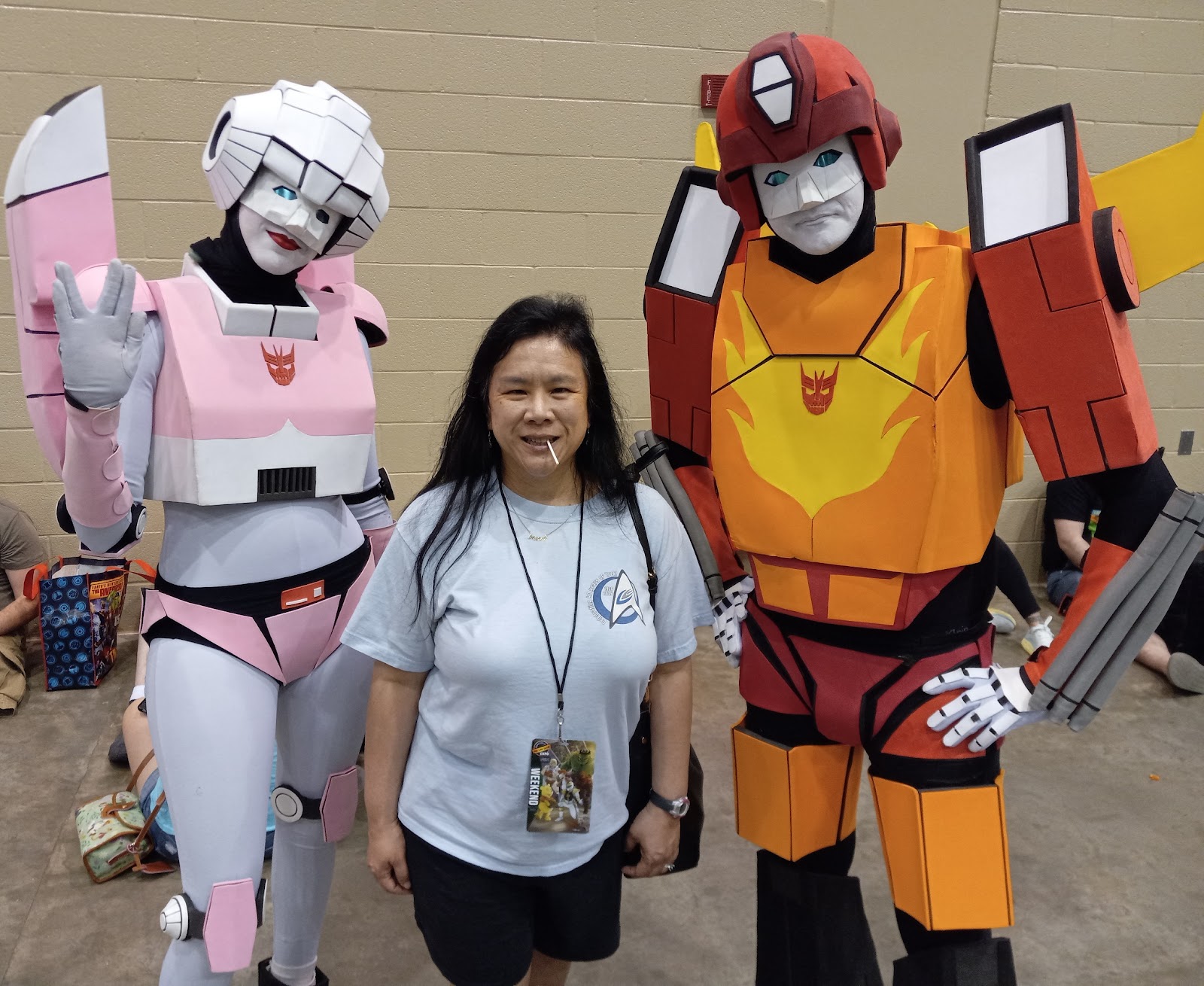 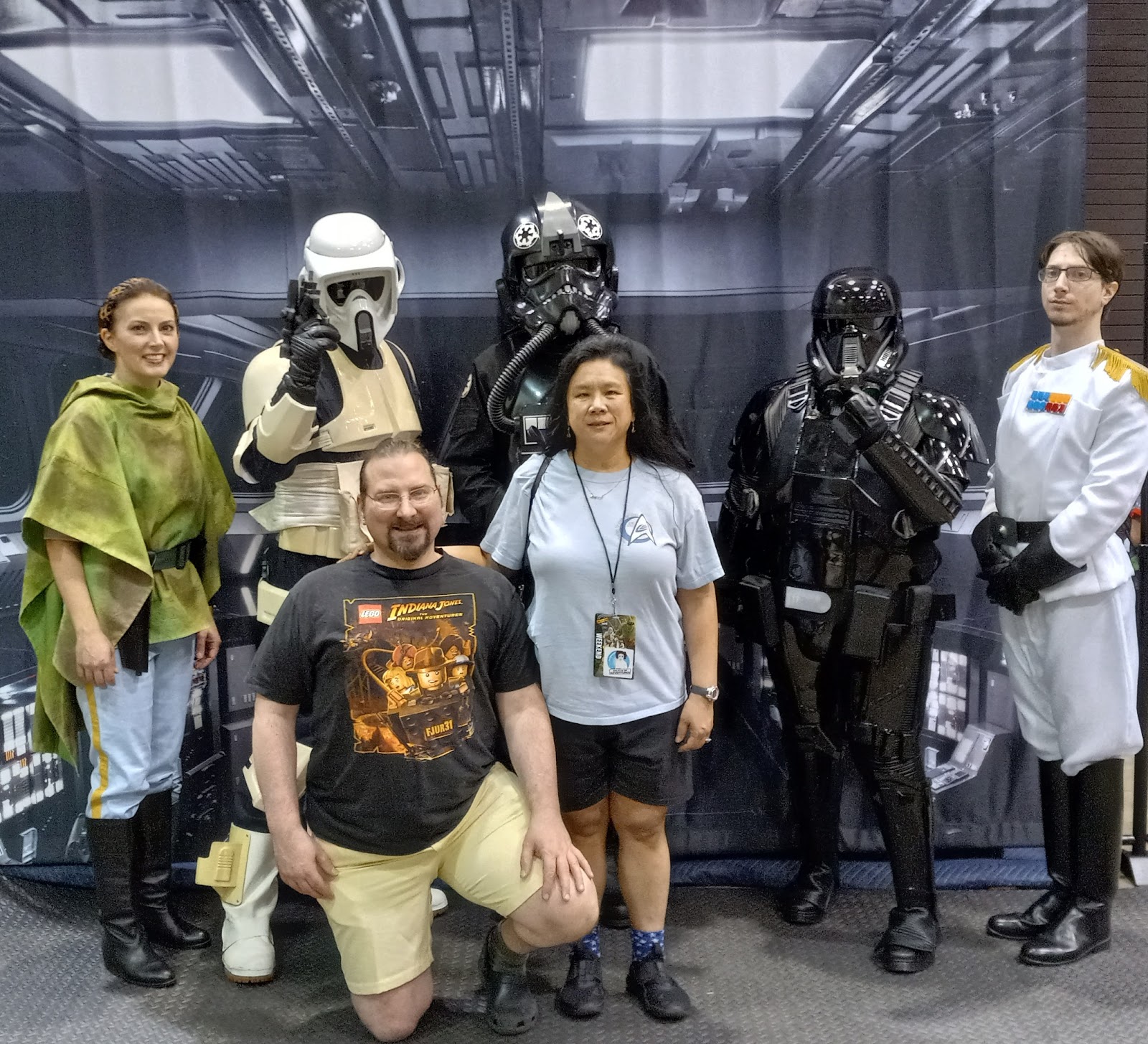 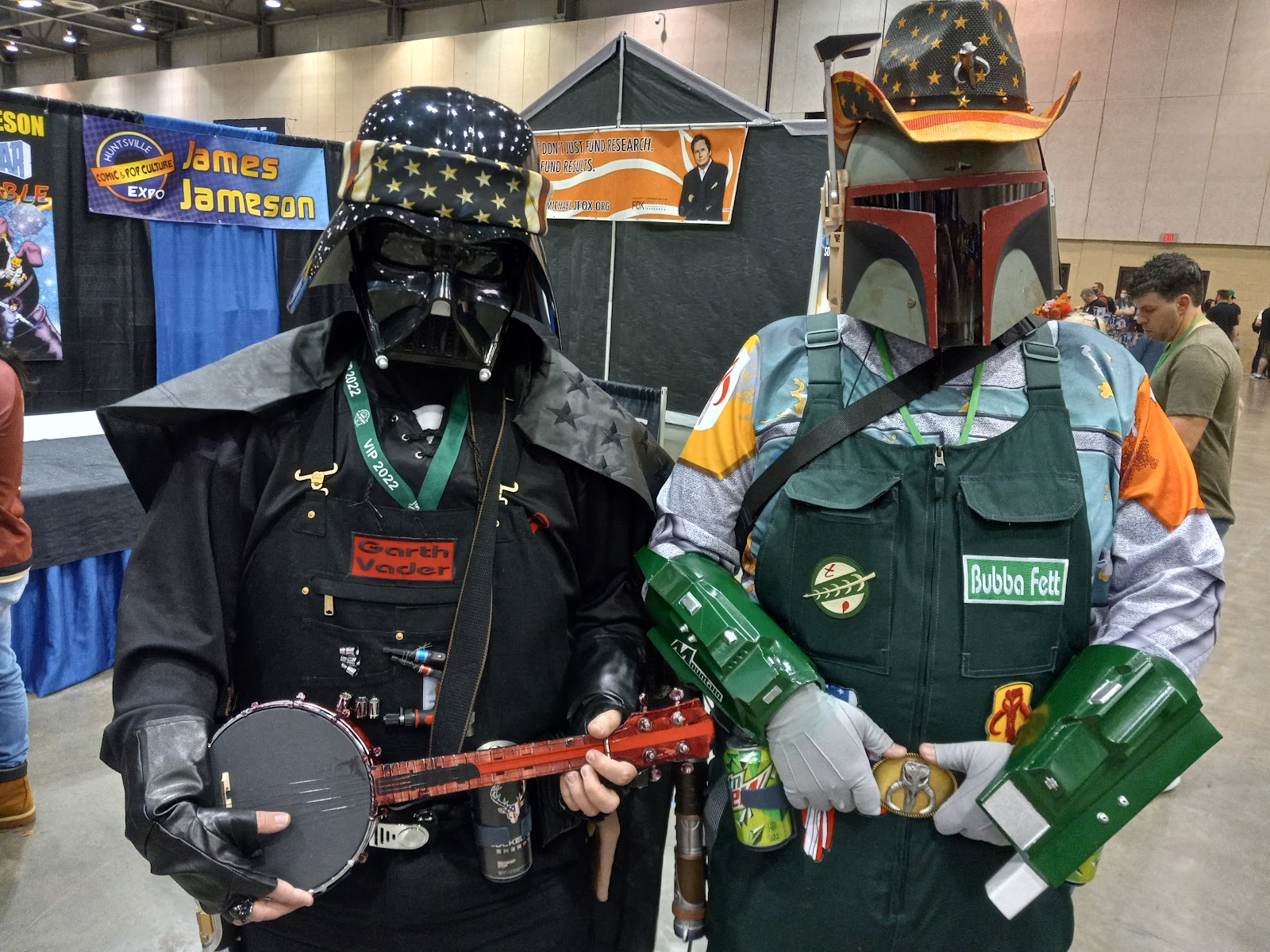 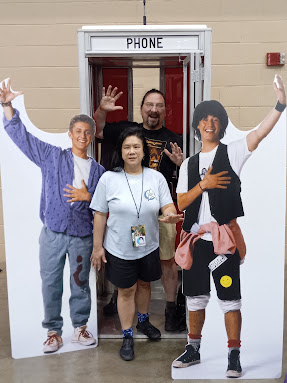 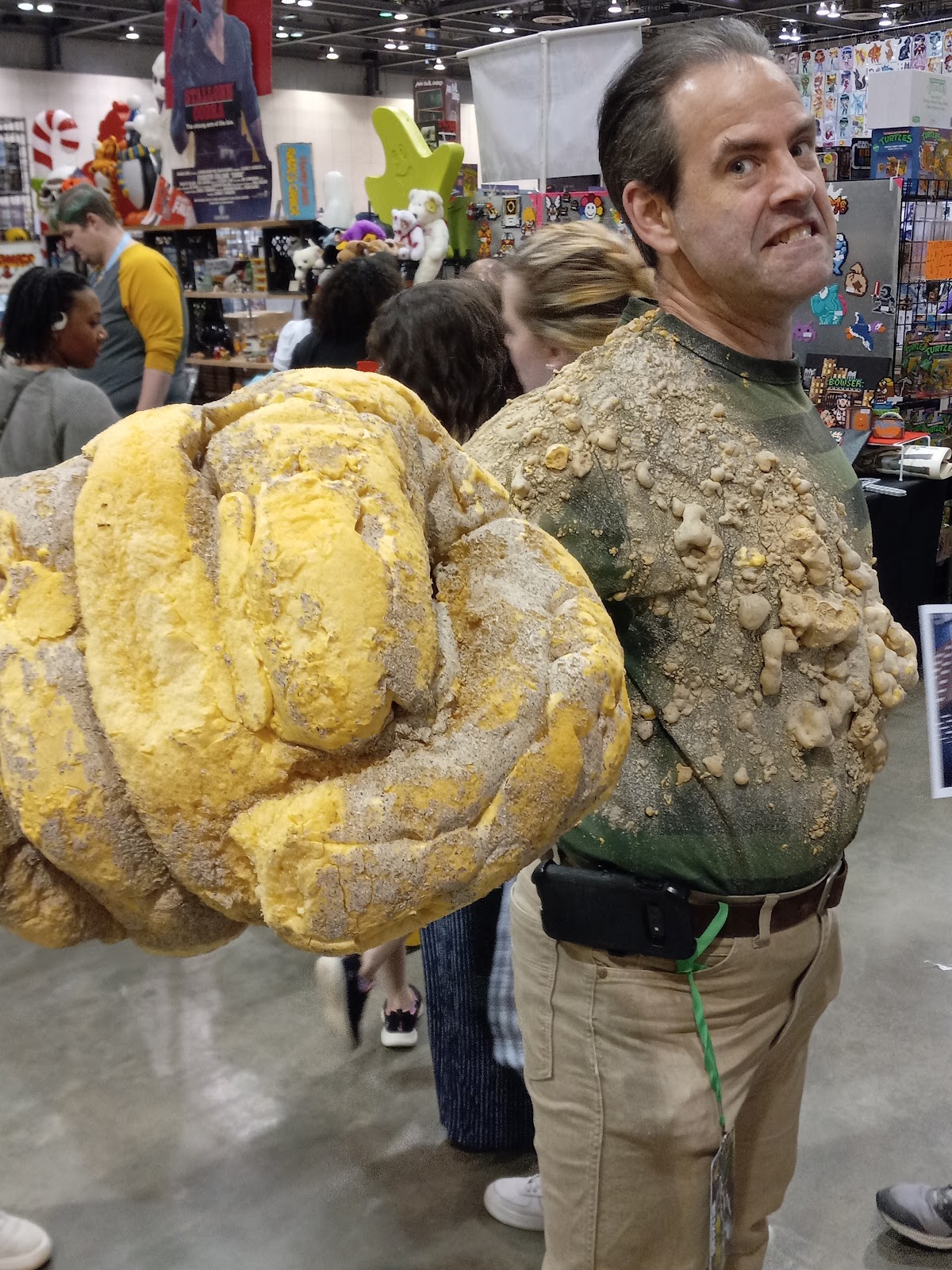 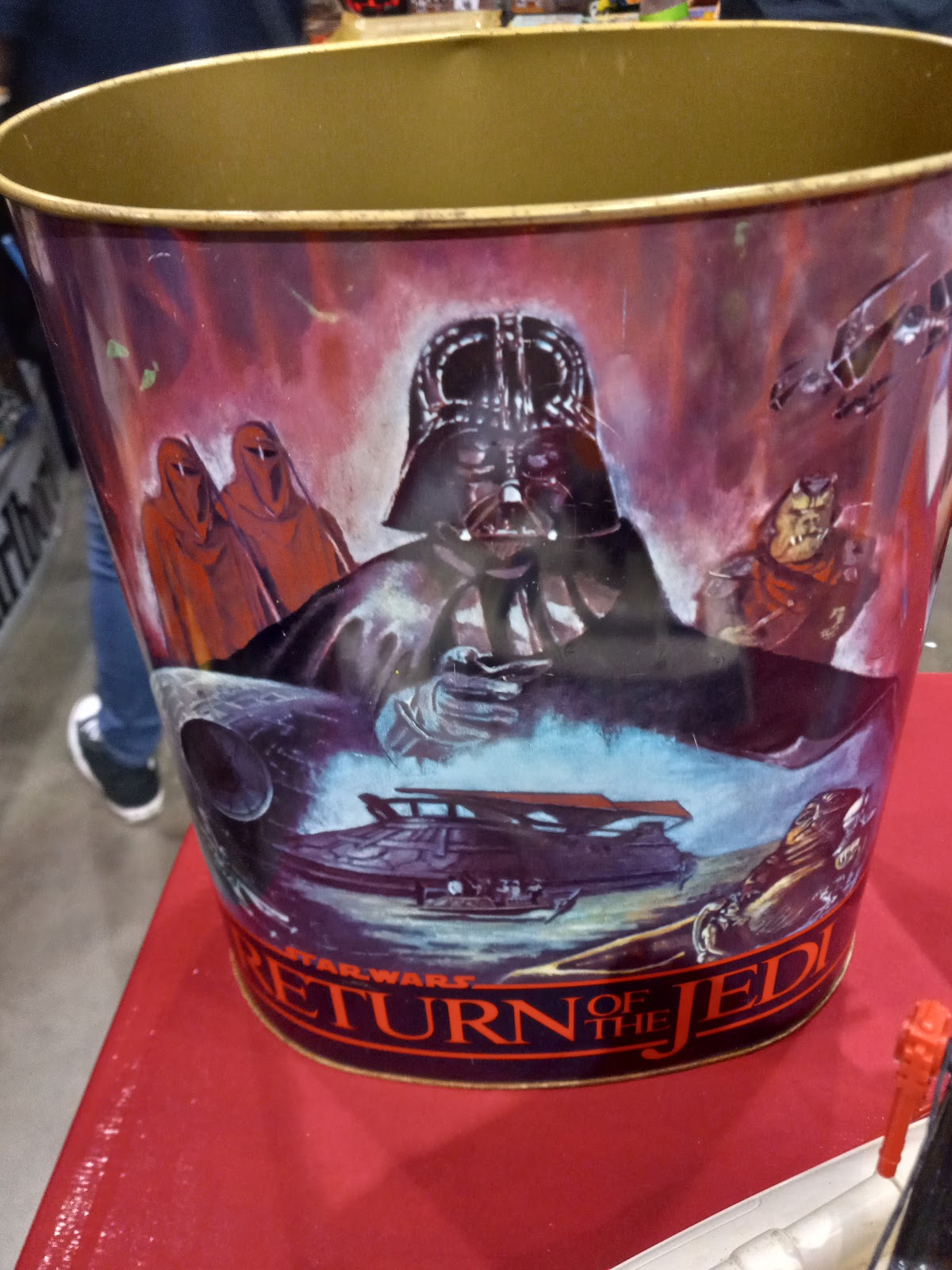 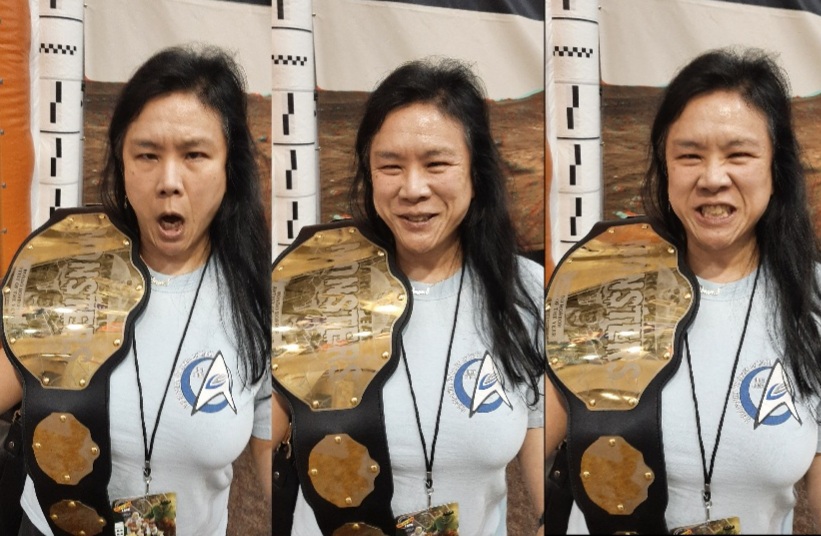 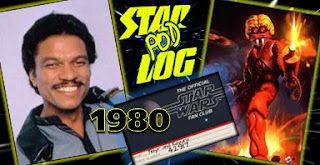 On this adventurous episode of StarPodLog, we consider the contents of Starlog magazine from 1980 in issues 35 and 36.Read along with your personal issue from your collection or for free here:https://archive.org/details/starlog_magazine-035Shocking Jon fills us in on actor Billy Dee Williams as he portrays Lando Calrissian in The Empire Strikes Back!Check out the Shocking Things podcast for more exciting content!https://anchor.fm/shockingthingsMichael Cortez tells us about what Toys and action figures were popular in 1980.Get all of your vintage toy needs taken care of at Billy Galaxy!http://billygalaxy.com/Plus: The Official Star Wars Fan Club, Buck Rogers, Brian Johnson, Universal Pictures, David Prowse, Battle Beyond the Stars, Glen Larsen, Gary Kurtz, and more on this episode of StarPodLog!We will be attending the Huntsville Comic and Pop Expo on March 22nd- 24th. Look for us!https://www.hsvexpo.com/The Imperial Commissary Collectors Convention is the greatest Star Wars and pop culture con in the galaxy! We will be at ICCC!https://iccollectorsconvention.com/https://www.ictoysnashville.com/Did you ever wonder what KISS would sound like if they continued to record and release music that had that had that Love Gun era sound? Look no further than Klassik '78!https://www.klassik78.com/Battlestar Raven is the flagship chapter of the Battlestar Galactica Fan Club. Join us!
https://m.facebook.com/455602271126942/

Read along with your personal issue from your collection or for free here:

Visit us on Blogger at https://starpodlogpodcast.blogspot.com/ or iTunes or Spotify or wherever you listen to fine podcasts! 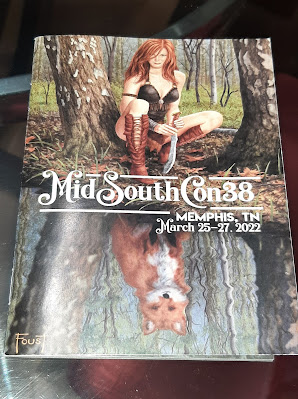 The city of Memphis, TN is widely known for ribs and Graceland. What other reason would you go there? If you’re a sci-fi/fantasy fan, you would go there for MidSouthCon. It’s the longest running fan-run multi-genre convention in the midsouth. They just had their 38th after taking two years off for Covid. They came back with a blast! March 25-27, 2022.

Nayr and I were thrilled to attend. We started out by visiting the vendors’ room. A few of the guests were there signing autographs, while were a variety of vendors filled the room. You could get all the anime memorabilia you wanted, or get some medieval jewelry, or anything else in between. There was a vendor selling CDs of space music that was out of this world. We listened to some samples and bought a couple of them. 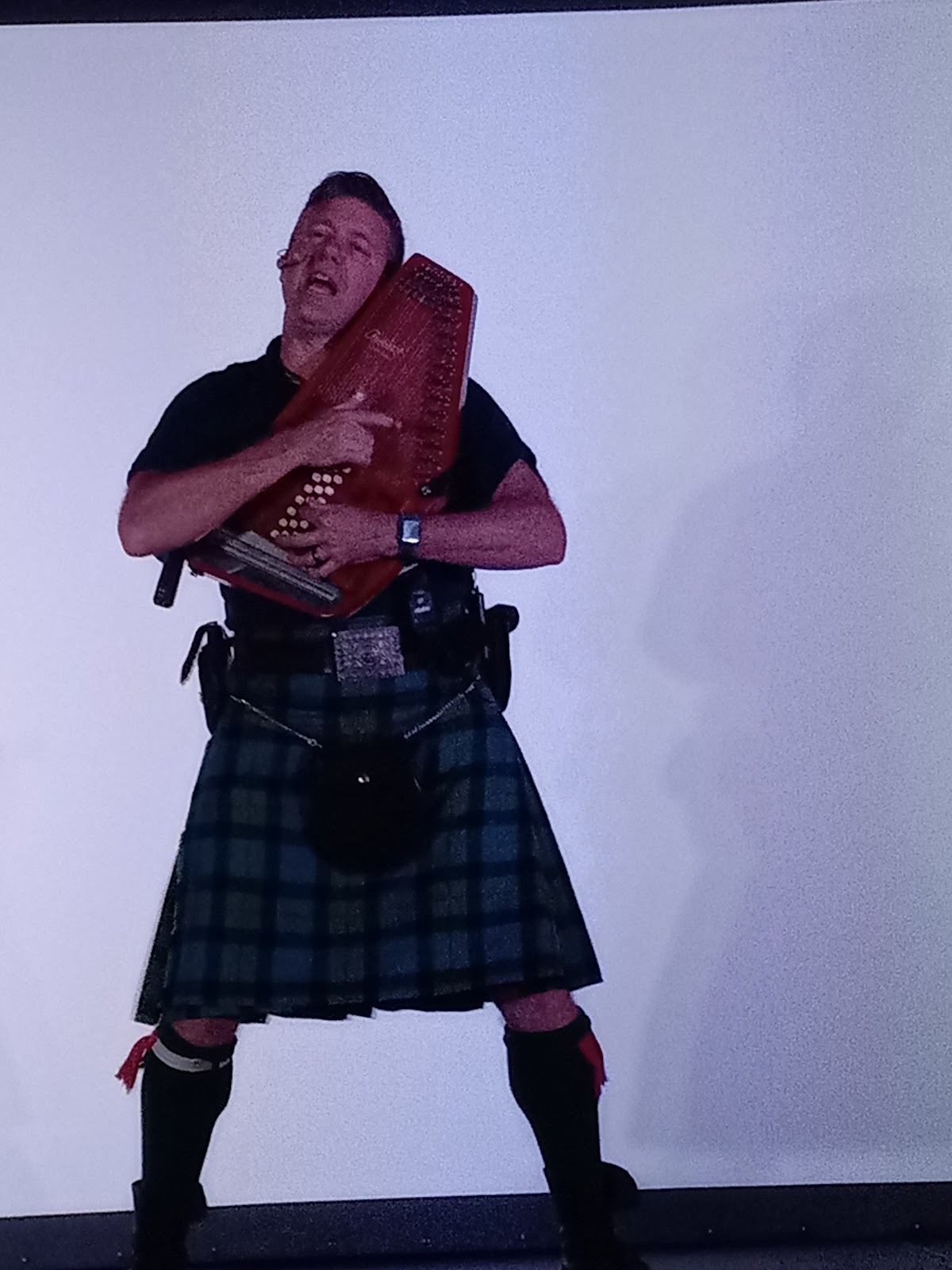 There was an art show that had spectacular fantasy paintings. Celtic and fantasy musician Marc Gunn, known for attending many cons in the southeast, did a wonderful concert. He had great songs, and was just as funny and friendly as ever. There was a huge gaming area that was open all night. They had a large collection of table top games, some of them quite rare. We stopped in and played a few games. Nayr even signed up for one of the RPGs. The masquerade contest was a sheer delight. There was a con suite where you could cool off and get some goodies. The con suite had soft drinks and juice and water, and a few snacks like cookies, chips, and crackers. 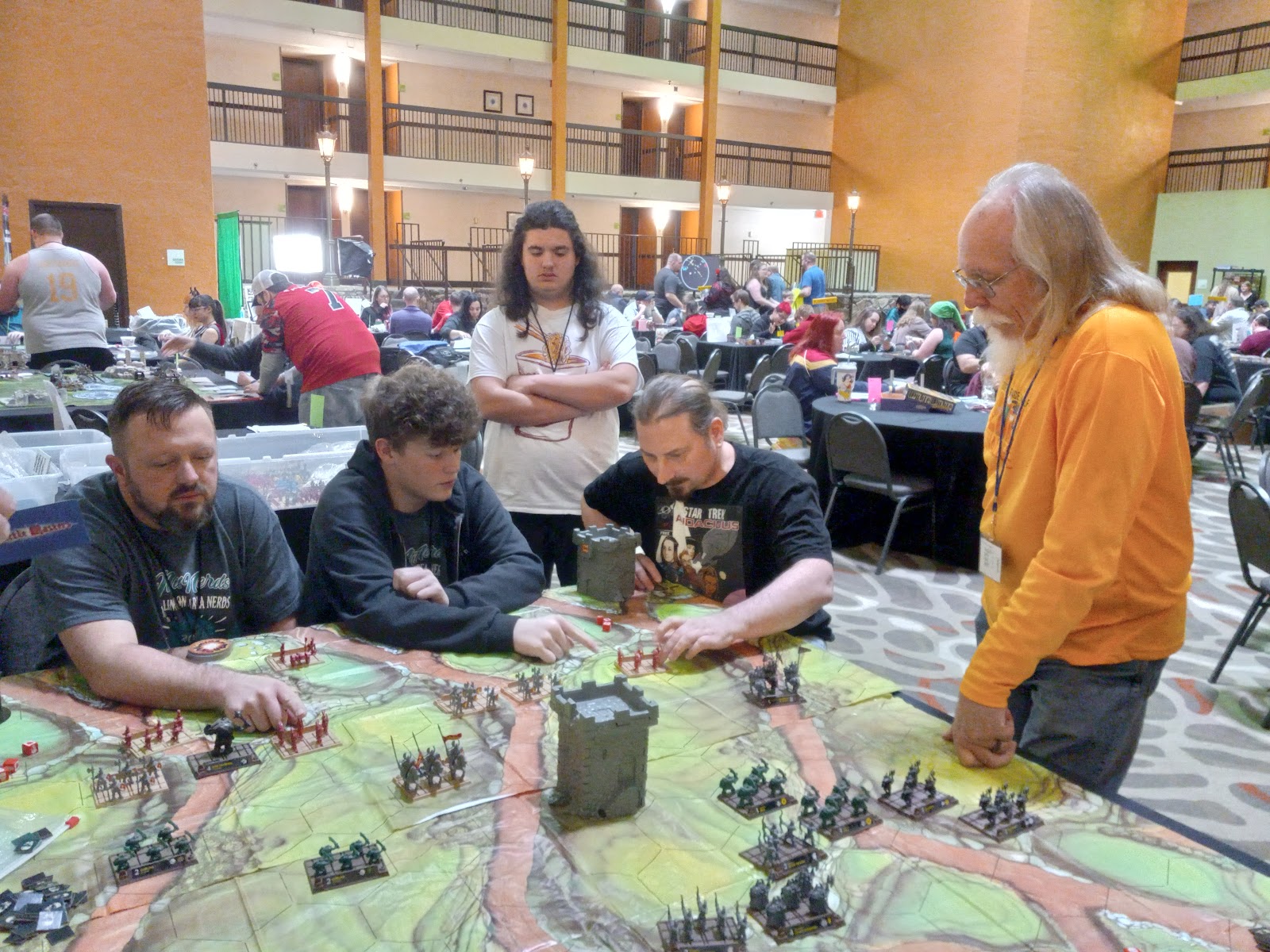 The Toastmaster was writer John Jackson Miller. He was the person we most wanted to see, as he has written both Star Trek and Star Wars novels. He was very friendly both at panels and in casual conversations. The con had panels on many subjects. There were sometimes five panels going on at one time! Panel subjects were things like cosplay, podcasting, science, movies, comics, or any nerdy thing you could want. Scientist Don Lincoln gave a panel on the theory of everything, which was very intriguing and informative. It even reminded me of the TV show Big Bang Theory, having used some of the same science buzz words. 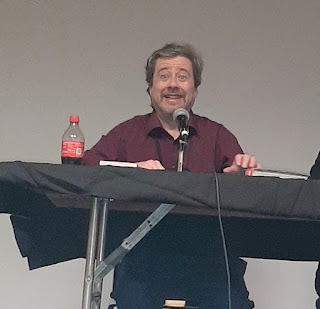 It was a pretty laid back con. We did some roaming around and just meeting random people. It was a fun fan-run con, and there were probably more people there in the hallways than anticipated by the show runners. They may need more space next time. But that’s a great problem to have. All the folks were friendly. As always, we ran into old friends and made some new friends. We even met some people who started a Star Trek fan club in Memphis in the ‘70s. This was most definitely a con we would like to attend again! 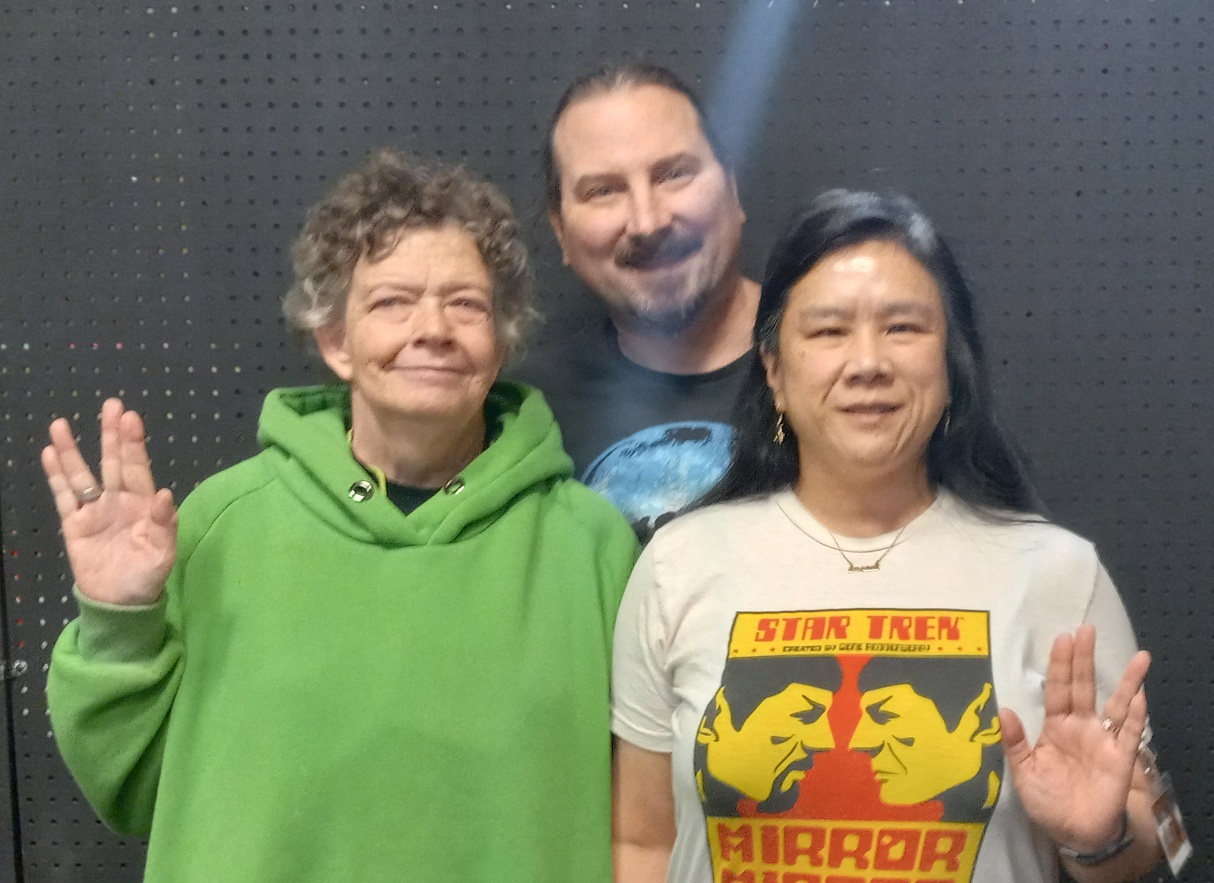 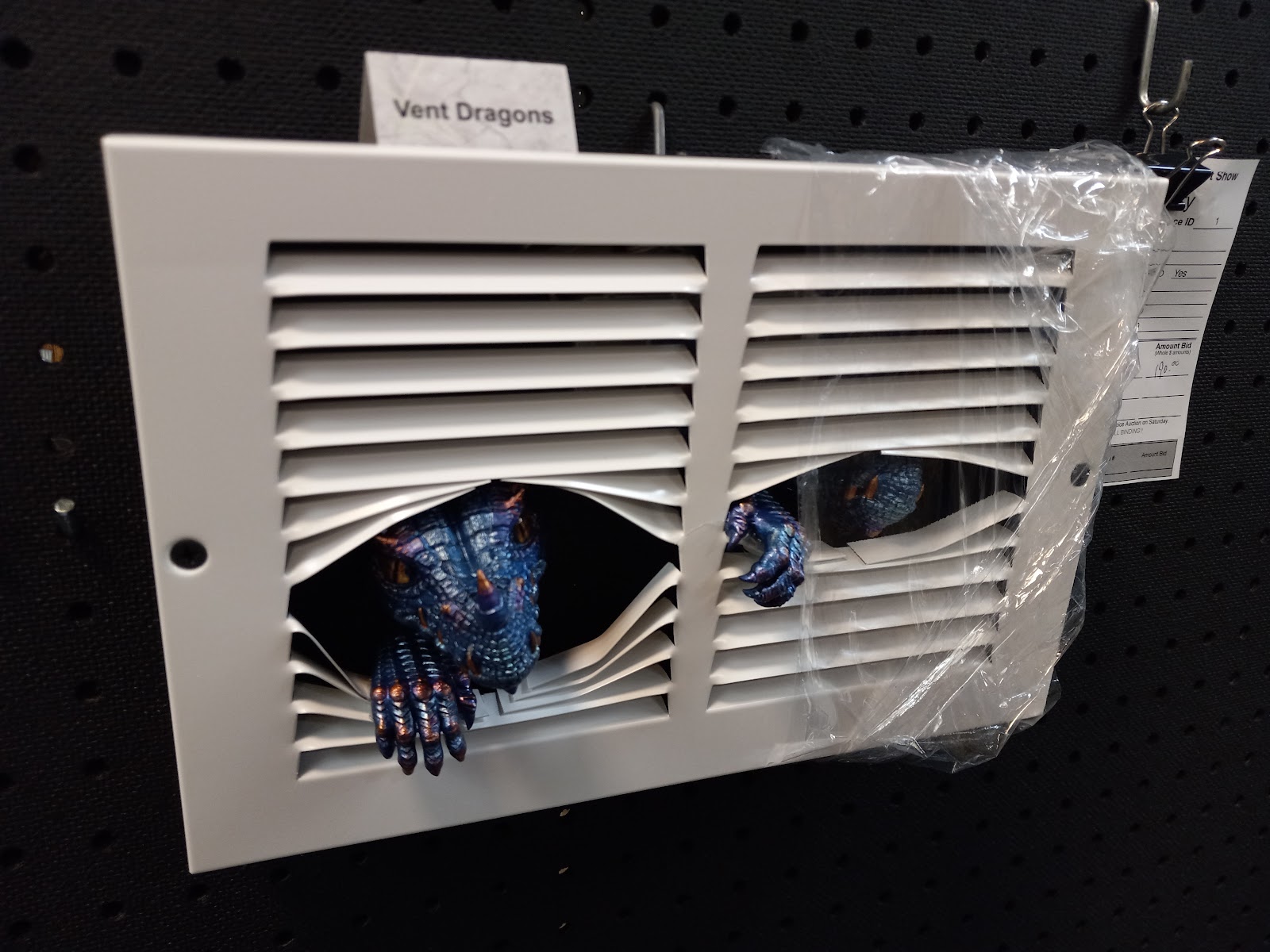 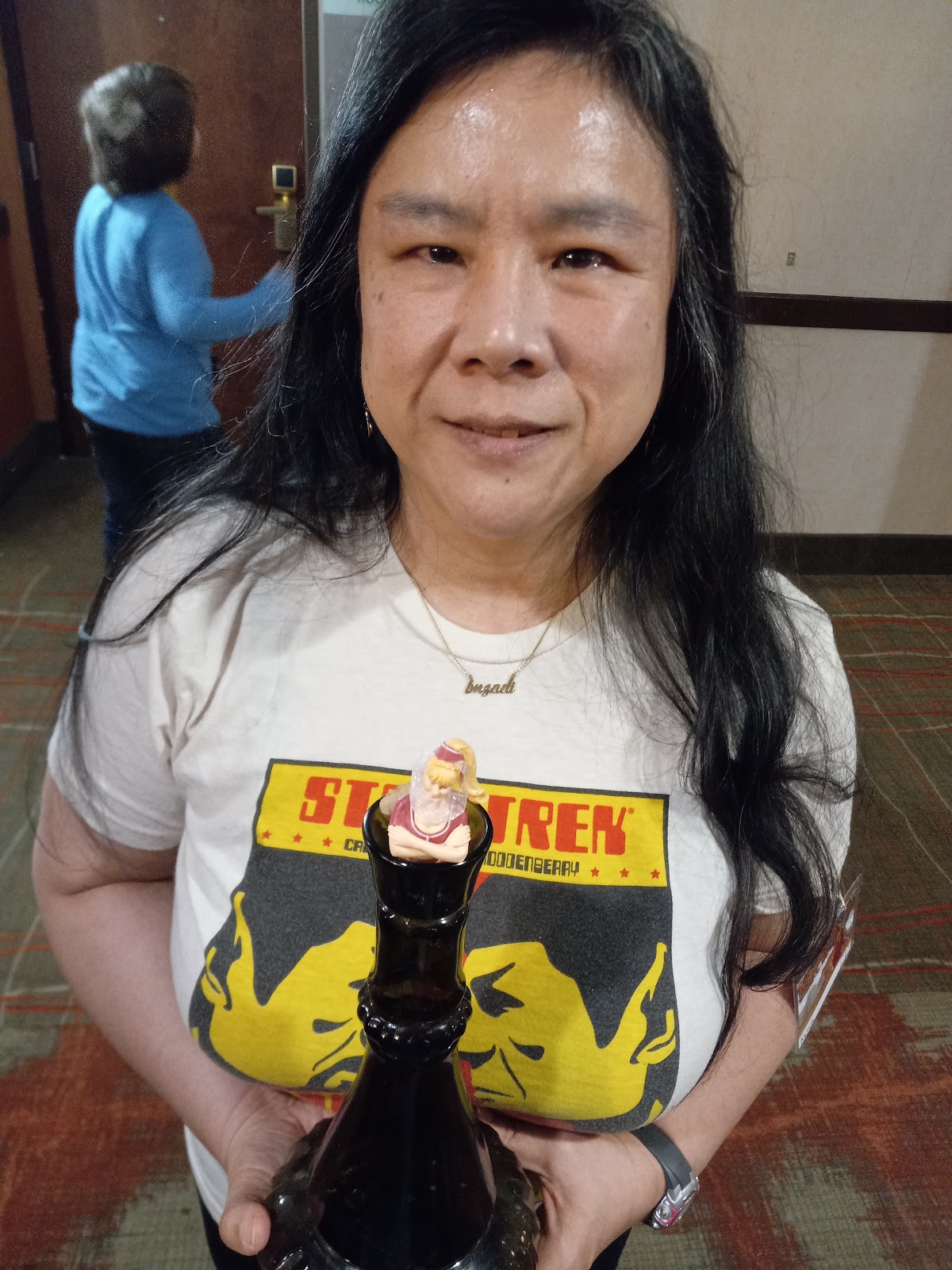 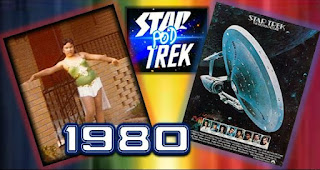 On this terrific episode of StarPodTrek, we consider the Star Trek and contents of Starlog magazine in issues 33 and 34 from 1980.

Read along with your personal issue from your collection or for free here:https://archive.org/details/starlog_magazine-033/page/n27/mode/2upBob Turner and Kelly Casto introduce Starlog's newest colluminist, Bjo Trimble.

Also, Kavura relates what it was like to be a ten year old seeing The Motion Picture on opening weekend, Walter Koeneg in Alien, and more on this episode of StarPodTrek!The official Star Trek Mission Chicago is April 8th-10th and we will be there. Tickets are still available for this incredible con!https://www.startrekmissions.com/en-us.htmlJoin us at the Huntsville Comic & Pop Expo on April 22nd- 24th!https://www.hsvexpo.com/The Imperial Commissary Collectors Convention is the greatest toy and pop culture con in the galaxy! We will be at ICCC April 29th- May 1st!https://iccollectorsconvention.com/

Visit us on Blogger at https://starpodlogpodcast.blogspot.com/ or iTunes or Spotify or wherever you listen to fine podcasts!