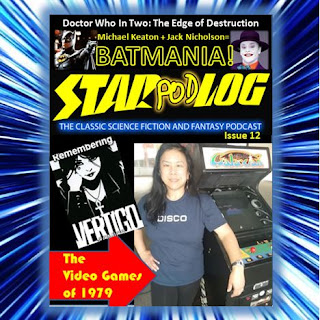 The Batman film of 1989 starring Michael Keaton and Jack Nicholson set the bar high for future Batman movies. Where else can you dance with the devil in the pale moonlight? Since 1993, Vertigo has been the leader in adult content for high caliber story telling in comics. And finally, can we please bring back the video games of 1979? From arcade games to handhelds, they were far out, man!!

StarPodLog The Empire Strikes Back 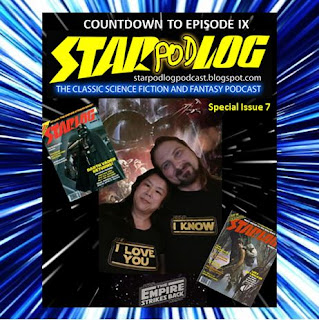 "I am your father." - The words Luke Skywalker will never forget.


The movie that just gets better every time you watch it.

Let's reminisce about the introduction of Lando, the coolest toys, and the best snow scenes ever. Get ready as The Empire Strikes Back. Enjoy this episode you will! 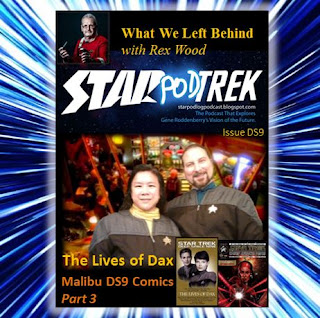 Here it is: our special Deep Space 9 episode! Join us for our celebration of this landmark series that changed television and Trek forever. Known as the darker Trek, it wasn't afraid to tackle issues of religion and war while having rich character development and a serialized story. The documentary What We Left Behind made us miss the show even more. The Lives of Dax was a hit with Ladies Trek Library. The conclusion of our DS9 comic series goes out with a bang! 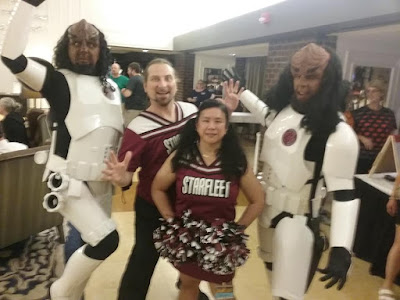 Every Trekkie knows this is a great time to be a Star Trek fan. More and more details are released every day about the new Picard series. Star Trek: Discovery is soon to have a third season. There are two animated series in the works. There is a Section 31 series coming. And the huge turnout at Shore Leave convention shows that Star Trek is still alive. Shore Leave is a fan-run Star Trek convention that focuses not only on guest actors, but also the writers who round out the fandom with their own original Trek stories. Not only that, but Shore Leave likes to add in a few actors from other genre shows, just to attract more fans and make it more interesting. Shore Leave 41 was July 12-14, 2019 in Hunt Valley, Maryland, right outside of Baltimore. This was my first time going to this one. (Actually, I went once, 12 years ago, but that was so long ago that I hardly remember any details, so I think I still qualify as a newbie.) The spacious convention hotel  seemed pretty packed all three days. At its peak, I estimate attendance probably hit one thousand people. With headline guests Ethan Peck and Anson Mount from Star Trek: Discovery, who could expect any less, right? 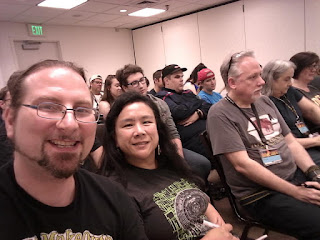 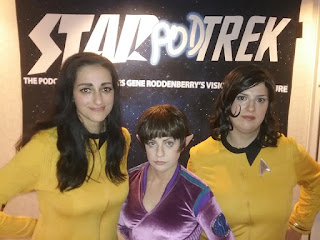 This con is well known for being the mecca of Trek novelists and comic writers, having over 40 guest  writers this year. I have been a huge fan of Trek comics and books since the '70s. It's one of the main reasons I wanted to come back to Shore Leave.  At the big Friday night writers panel, hot new announcements were made. 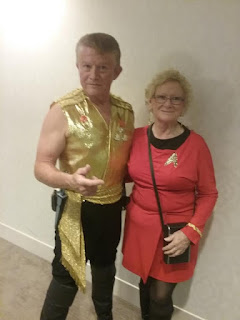 A few hours later was the "Meet the Pros" event where all the authors were sitting at tables for 2 hours. I had some nice chats with the writers and got autographs for books and comic books and took some selfies with them. It turned out I didn't have time to meet all of the writers that I wanted to get autographs from. I didn't know they wouldn't be as readily available during the rest of the con. The next day there were no designated tables or times when I could get autographs. They were on some scheduled panels, but oftentimes they didn't have time to sign between panels, because they were in a hurry to get to their next panel.

All that aside, all the authors were really nice. My husband Nayr and I also got some of them to record bumpers and interviews for our podcast. John Jackson Miller laughingly said "You have to have the initials JJ to do both Star Trek and Star Wars!" (And of course, we know Miller has written for both, just as JJ Abrams has directed both.) He brought copies of his new book, "Star Trek: Discovery: The Enterprise War", which won't be available in stores for another week, and, naturally, we bought one and got him to sign it.

We were wearing our Star Trek Cruise t-shirts when we spoke with Dayton Ward, and he told us all about the Disney Cruise he did with his wife and kids. I told Greg Cox I really enjoyed his "Q Continuum" series. He said he loved that one, and usually everyone mentions his Khan books. David Galanter signed our "Troublesome Minds" book, and he said his book "Crisis of Consciousness" was like "Troublesome Minds" in that it is also very much a Spock story. Now I definitely want to read that one too! 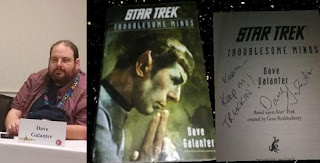 I tried to catch Keith DeCandido as I passed him in the hallway, and he said, "I'm going to a panel. I will sign later." I saw him later when I was going up the escalator, and he was going down the escalator. He said, "Oh, yeah. You wanted an autograph." So he turned around and ran upwards on the down escalator! I got him to sign my copy of "Klingon Art of War" and took a selfie with him. 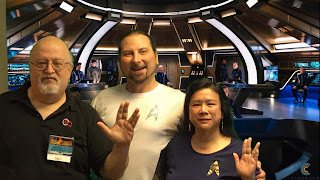 John Coffren, who wrote an award-winning story in "Star Trek: Strange New Worlds", actually recognized my husband Nayr and I, and said he likes our Mego Klingon cosplay that he was pictures of on Facebook. It's always great to meet a fan!

There were people from the local library with a display set up for people to have their picture taken in front of a green screen, and a background could be chosen to be added in. We were wearing Discovery shirts, so we chose the Discovery bridge for our background. Famed Trek novelist Peter David happened to be walking by, so we asked him to be in the picture with us. It was so cool!

Moving on to the "celebrities", (not that writers aren't celebrities) we asked the information desk when Ethan Peck (Discovery's Spock) would be signing autographs, as it wasn't in the program book or on any signs, and they said the stars sign whenever they want. We would just have to keep looking for them to be at their tables to sign. We were very disgruntled at that. The con did the actors' autograph schedules like they did the writers' autograph schedules, which was no schedule at all. Between Nayr and I, we've been to over 200 cons, and we've never seen such a deliberate lack of planning. Well, there were two Shore Leave 101 panels. Maybe we if we had gone to one of those panels they would have explained such oddities. 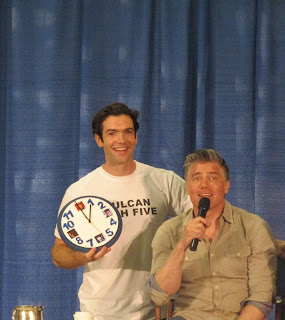 But we did manage to get Ethan Peck's autograph and speak with him. He was very nice. He seemed a little shy, which is expected from someone so young and new to all this fame and attention. Ethan peck and Anson Mount did their Q&A panel together. They seemed to have good camaraderie.  Anson said he originally auditioned for the part of Lorca. He didn't get that part, but they called him back for Pike, and he was perfect for that part. Ethan read a part at his own audition. They didn't tell him it was Spock that he was auditioning for. Then they called him back to play an Andorian named Tom. He could tell just by the lines that it was really the part of Spock. Anson said the best part of that story was that the Andorian's name was "Tom"!

The panel ended with a lady auctioning off a Spock clock that she made. It had different pictures of Spock on it. "Spock Around the Clock" as we like to call it! The money would go to charity. The bidding went pretty high. When it got up to $350, Anson Mount said if someone would bid $500 he would... He thought about it for a few seconds, then announced he would record a message for their cell phone. Someone immediately shouted out $600. And it was sold! Lucky lady!

Nichelle Nichols, Uhura, was there as part of her farewell tour. She is getting up there in age, so she reportedly will not be doing any more cons after this year. She was in a wheelchair. We saw her several times being pushed down the hall in the wheelchair. She seemed to be smiling and happy, though. She didn't do a Q&A, just autographs and photo-ops. 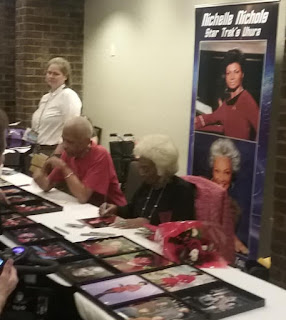 There were so many other things going on. There was a costume contest that we unfortunately missed. We went to a party called Trek-n-Toga, which apparently is a staple at this con. They had togas for people to wear at the party, if desired. There was a science track. There was a gaming room, which Nayr always loves to visit. It was especially inviting to us because they had some snacks, and there was no con suite, something we usually expect at cons in the south. There were a lot of awesome fan discussion panels on Trek and other subjects. There was a panel on "Buck Rogers' 40th Anniversary" and "Big Bang Bye". Non-Trek actors at the con were Lexa Doig and Michael Shanks from Stargate. Also from Smallville: Erica Durance, Aaron Ashmore, John Glover, and Laura Vandervoort. 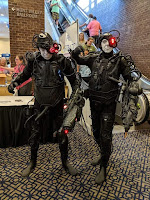 It was pretty crowded. The space seemed too small for the all the people there. I did hear that one room the con normally occupies was closed for remodeling. The host hotel and all the neighboring hotels had jacked up prices, which, we heard, was due to a sporting event in the area. Instead of paying inflated prices, we got a rental car and a hotel thirty minutes away. Lack of autograph schedules was the real buzz killer. But still, everything else was well-organized. Most of the fan discussion panels were led by, what we understood, were veterans of the con. In other words, people who knew how to keep a panel interesting and fun. All-in-all, it was an awesome con! We made a lot of new friends and ran into some old friends. Seeing Anson Mount and Ethan Peck for the first time was a real treat. And seeing all my favorite writers in one place was the icing on the cake! 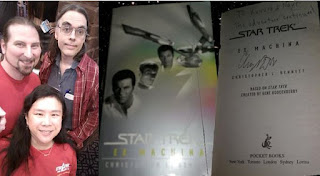 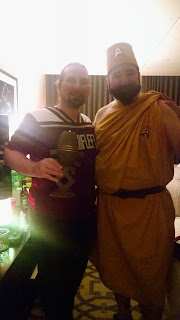 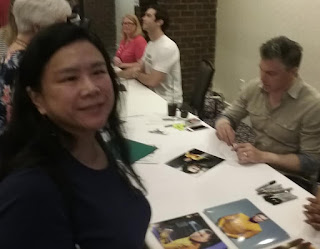 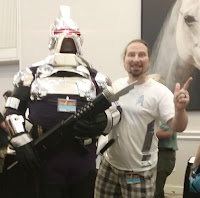 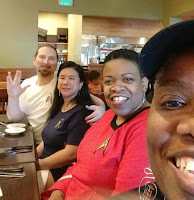 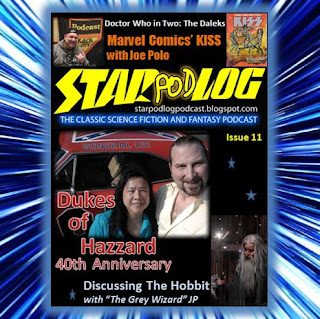 Two of our favorite mediums melded beautifully when Marvel Comics made superheroes out of the rock band KISS. Everyone remembers when The Dukes of Hazzard brought its own style of kitsch to television. And we all read The Hobbit when we were kids, but find out why it's more than just a children's fantasy novel!