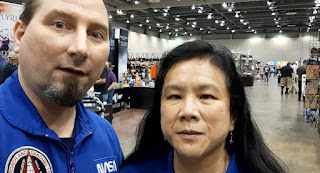 This was our third trip to Huntsville Comic & Pop Culture Expo in Huntsville, AL. On the drive down from Nashville, TN, there were several huge model rockets along the roadside to welcome us to the city nicknamed Rocket City. The city earned its moniker by being home to NASA’s Marshall Space Flight Center. We attended the con sporting our replicas of NASA uniforms worn by the crew of Enterprise, the first space shuttle, which takes its name from the famous spaceship from our beloved Star Trek. We always enjoy this con for its laid back atmosphere and its great location at the Von Braun Center. Huntsville is also the hometown of our STARFLEET Internation ship, the USS Wernher von Braun. One of our shipmates, Laura, is a yearly vendor at the con, greeting everyone with a smile, and always being the most Trek-stocked vendor out of the huge vendors’ room. 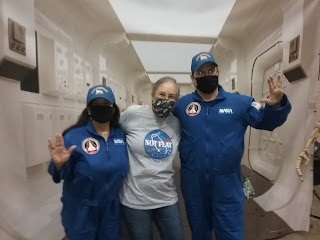 This is one of the best cons for comic book collectors, having comic book guests and loads of vendors selling comic books of all kinds from all eras. We even did an interview with comic book writer Jim Shooter. Star Wars was represented by fan tables by the 501st Legion and the Rebel Legion. Both groups are there every year trouping in costume and happily taking pictures with fans. 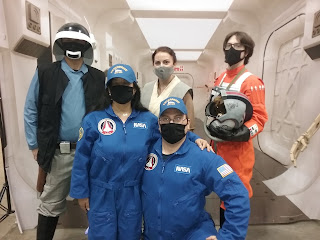 We presented two panels this year. The first was “Star Trek 101”, a primer on all the Star Trek TV shows and movies for anyone new to Star Trek or anyone who just needs a review of this classic show that has endured over fifty years and has so much content that only the truest of fans can keep up. Our next panel was “Starlog: The World’s Greatest Sci-Fi and Fantasy Magazine”, covering all the things that were great about this magazine that kept us informed of all things geeky before there was an internet. We had a great time at our panels, receiving positive and enthusiastic feedback from the audiences. Next year’s expo has been scheduled for April 22-24, 2022. We plan to be there in costume and making a boom in Rocket City! 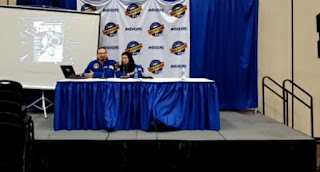